LONDON, May 20 (Reuters) - Russia rushed forward two payments on its international debt on Friday in its latest attempt to stave off a default that has looked on cards since its invasion of Ukraine.

A week before the interest payments are due and just five days before a key U.S. waiver allowing such transfers expires, Russia's finance ministry said it had wired $71.25 million for a dollar-denominated bond and 26.5 million euros ($28 million) for euro-denominated notes . read more

Russia has faced the prospect of sovereign default since Western capitals imposed sweeping sanctions in the wake of its invasion of Ukraine on Feb. 24. The country has been all but cut off from the global financial system and has seen roughly half of its $640 billion reserves abroad frozen.

Russia, which has retaliated with some counter-measures of its own, has been able to keep paying until now because of a special licence from the U.S. Treasury,which allows international bond holders to receive these kinds of payments.

That exemption is due to run out on May 25,however, and U.S. Treasury Secretary Janet Yellen signalled this week that it won't be extended. read more

"They are kicking the can down the road," said Kaan Nazli at asset managers Neuberger Berman, who holds some Russian sovereign bonds.

The country's $40 billion of international bonds, around half of which are held by foreign investors, have emerged as a flashpoint in recent months.

While Russia initially seemed keen to withhold payments to foreign investors unless it was allowed to make use of its frozen reserves abroad, this seems to have changed.

"The strategy turned into Russia not wanting to be the party to blame for the default," said Nazli.

According to the finance ministry, Russia's national settlement depository - which acts as a payment agent on the two bonds - had received the funds.

It was unclear if the funds would reach foreign holders of the two Russian Eurobonds, a multistep process that usually involves international banks and clearing houses.

JPMorgan, which previously acted as a correspondent bank on such payments, did not immediately respond to a request for comment. The U.S. Treasury declined to comment.

Russian Finance Minister Anton Siluanov said on Wednesday that Moscow would service its external debt obligations in roubles if the United States blocks other options and would not call itself in default as it had the means to pay. read more 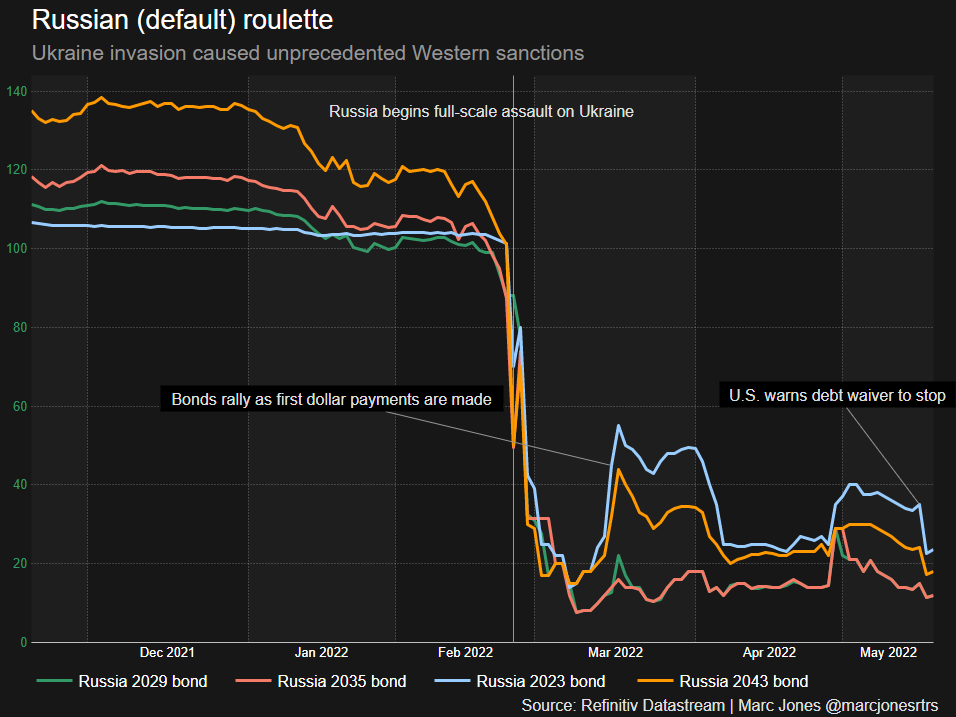 Despite the plethora of curbs, Russia has managed to make payments on seven bonds since its invasion of Ukraine before the latest interest payments.

But it seems increasingly unlikely that the U.S. Office of Foreign Assets Control (OFAC) will extend the licence Russia needs to make the payments. Treasury Secretary Yellen said on Wednesday that while no final decision had been taken, it was "unlikely that it would continue." read more

Those in support of an extension argue that allowing Russia to service its debt would drain its war chest by forcing Moscow to use its hard-currency revenues to make payments to creditors.

Opponents say Russia has to pay less than $2 billion on its external debt until the end of the year, which pales compared with Moscow's oil and gas revenue of almost $28 billion in April alone thanks to high energy prices.

The next payments after the May 27 one are $235 million across two Eurobonds due on June 23.

"This is delaying the inevitable," said Petar Atanasov, co-head of sovereign research at Gramercy, a specialist emerging market debt fund. "At some point they will not be able to make the payments anymore."

Reporting by Karin Strohecker, additional reporting by Marc Jones and Jorgelina do Rosario in London, Michelle Price in New York, editing by Nick Macfie and Hugh Lawson
Disclaimer: The views expressed in this article are those of the author and may not reflect those of Kitco Metals Inc. The author has made every effort to ensure accuracy of information provided; however, neither Kitco Metals Inc. nor the author can guarantee such accuracy. This article is strictly for informational purposes only. It is not a solicitation to make any exchange in commodities, securities or other financial instruments. Kitco Metals Inc. and the author of this article do not accept culpability for losses and/ or damages arising from the use of this publication.