NEW YORK, May 24 (Reuters) - The U.S. dollar index hit a nearly one-month low on Tuesday after European Central Bank President Christine Lagarde said eurozone interest rates will likely be in positive territory by the end of the third quarter, giving the euro a boost.

Lagarde's comments implied an increase of at least 50 basis points to the ECB deposit rate and kept speculation alive of bigger rate hikes this summer to fight record-high inflation, partly due to rising energy prices over Russia's war against Ukraine as well as massive public-sector stimulus the pandemic. read more

In the United States, most of the foreseeable tightening from the U.S. Federal Reserve has likely been priced in already, said Marshall Gittler, Head of Investment Research at BDSwiss Holding.

"This difference in expectations could propel EUR/USD higher still over the next several sessions as the market has only recently begun to reprice this differential," he said.

Minutes from the Fed's May policy meeting are due to be released on Wednesday.

The greenback weakened further after data showed U.S. business activity slowed moderately in May as higher prices cooled demand for services while renewed supply constraints because of COVID-19 lockdowns in China and the war in Ukraine hampered production at factories. read more

S&P Global said its flash U.S. Composite PMI Output Index, which tracks the manufacturing and services sectors, showed the pace of growth was the slowest in four months.

Sterling fell sharply against the U.S. dollar after PMI data showed that momentum in Britain's private sector slowed much more than expected this month, adding to recession worries as inflation pressures ratcheted higher. The British pound was down 0.56% at $1.2515.

Broader sentiment remained fleeting, however, with traders prepared to flee from one asset class to another at the first sign of weakness.

An index of currency market volatility was at 9.46%, not far from a two-year high above 10.5% hit earlier this month. 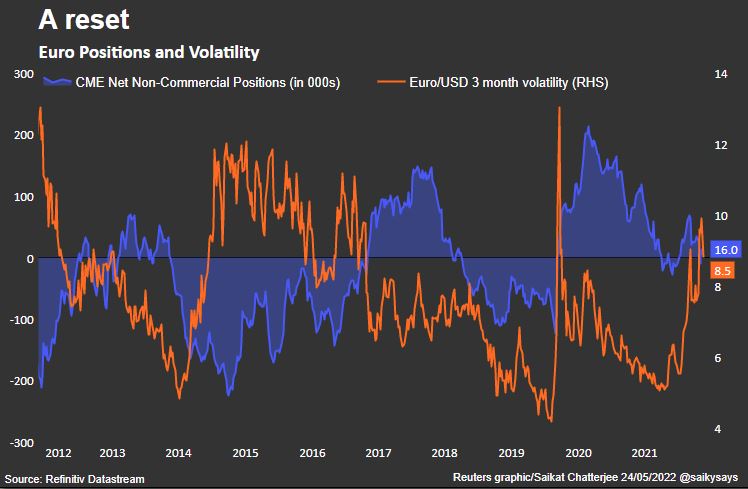 euro positions
Reporting by John McCrank in New York and Saikat Chatterjee in London; Editing by Emelia Sithole-Matarise, Kirsten Donovan and Nick Zieminski
Disclaimer: The views expressed in this article are those of the author and may not reflect those of Kitco Metals Inc. The author has made every effort to ensure accuracy of information provided; however, neither Kitco Metals Inc. nor the author can guarantee such accuracy. This article is strictly for informational purposes only. It is not a solicitation to make any exchange in commodities, securities or other financial instruments. Kitco Metals Inc. and the author of this article do not accept culpability for losses and/ or damages arising from the use of this publication.