Dollar eases as traders scale back bets on Fed tightening

NEW YORK, May 26 (Reuters) - The U.S. dollar dipped on Thursday after minutes from the Federal Reserve's May meeting pointed to additional 50 basis point interest rate hikes in June and July but left wiggle room for the central bank to slow the tightening cycle in the second half of the year.

"The U.S. dollar is no longer king dollar that it was just a couple of weeks ago," said Boris Schlossberg, managing director of FX strategy at BK Asset Management.

Most participants at the Fed's May meeting judged 50 basis point hikes would likely be appropriate at the June and July policy meetings to combat inflation that they agreed had become a key threat to the economy's performance, the minutes, which were released on Wednesday, showed.

Many of the participants believed that getting rate hikes in the books quickly would leave the central bank well positioned later this year to assess the effects of policy firming.

The dollar index reached a nearly two-decade peak above 105 in mid-month but signs that aggressive Fed action may already be slowing economic growth have prompted traders to scale back tightening bets, with Treasury yields also dropping from multi-year highs.

The implied yield on the eurodollar futures June 2023 contract -- essentially where markets see interest rates to be at that point -- is down some 80 basis points this month.

"The dollar at this point is range-bound," Schlossberg said.

The decline partially unwound some of the prior week's surge, which had pushed claims to their highest level since January.

In a separate report on Thursday, the Commerce Department confirmed the economy contracted in the first quarter under the weight of a record trade deficit and a slightly slower pace of inventory accumulation compared to the fourth quarter.

Sterling briefly rose to a three-week high of $1.26165 ahead of an expected announcement from British Chancellor Rishi Sunak on a package of measures to help consumers cope with rising energy bills. read more 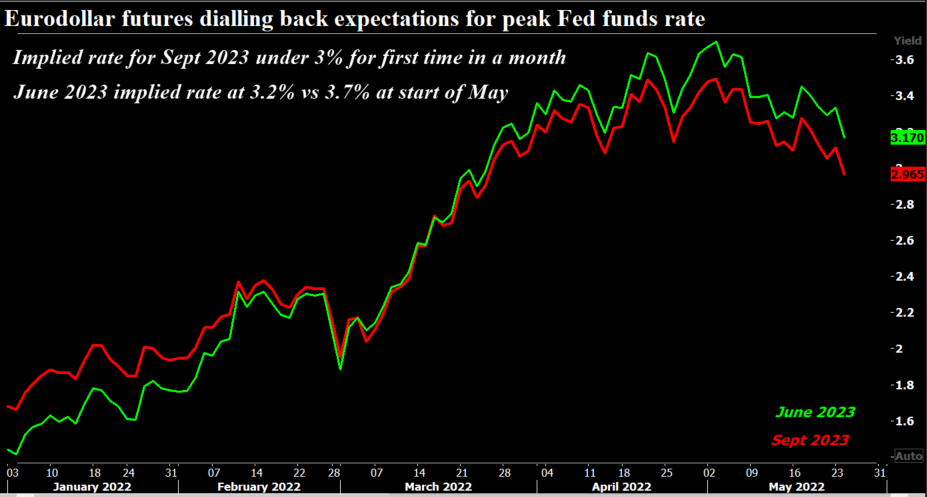 Eurodollar futures
Reporting by John McCrank; additional reporting by Samuel Indyk; Editing by Emelia Sithole-Matarise/Kirsten Donovan/Ken Ferris
Disclaimer: The views expressed in this article are those of the author and may not reflect those of Kitco Metals Inc. The author has made every effort to ensure accuracy of information provided; however, neither Kitco Metals Inc. nor the author can guarantee such accuracy. This article is strictly for informational purposes only. It is not a solicitation to make any exchange in commodities, securities or other financial instruments. Kitco Metals Inc. and the author of this article do not accept culpability for losses and/ or damages arising from the use of this publication.