LONDON, May 27 (Reuters) - The dollar edged higher on Friday but was on track for its biggest weekly drop in nearly four months as traders lowered Federal Reserve rate hike expectations amid signs the U.S. central bank might slow or even pause its tightening cycle in the second half of the year.

A broad-based decline in U.S. Treasury yields, weak economic data and cautious comments by some Fed policymakers including Atlanta Fed President Raphael Bostic this week have raised the prospect that the dollar's gains premised on aggressive rate hikes may have halted for now.

"The market’s tentative speculation about a pause in the Fed’s tightening cycle in September is surely contributing to keeping the dollar soft," ING strategists said.

The dollar index , which measures the greenback against a basket of six other major currencies, fell as low as 101.43 for the first time since April 25. On a weekly basis, it was down 1.3%, its biggest weekly drop since the first week of February.

It hit a nearly two-decade peak above 105 earlier this month but has retreated since then as economic data has weakened. A Citigroup economic surprise index (.CESIUSD) for the United States has fallen to its lowest level since September 2021.

But some analysts were cautious about calling for a deeper drop in the dollar with global markets still on edge.

"Month-end portfolio rebalancing is expected to give the dollar a boost so I would expect losses to ebb and suspense is high for ISM and payrolls next week after the dreadful new homes sales data this week," said Kenneth Broux, an FX strategist at Societe Generale in London.

Minutes from the Fed's May meeting this week showed most participants believed 50 basis-point hikes would be appropriate at the June and July policy meetings, but many thought big, early hikes would allow room to pause later in the year to assess the effects of that policy tightening.

The chief beneficiary of the dollar's decline is the euro but that momentum has also stalled as investors believe a lot of the expected rate hikes from the European Central Bank are already baked into current levels.

Better risk sentiment did not help bitcoin however, which slipped 1.62% to around $28,710, continuing this week's gradual decline from the psychologically important $30,000 level. 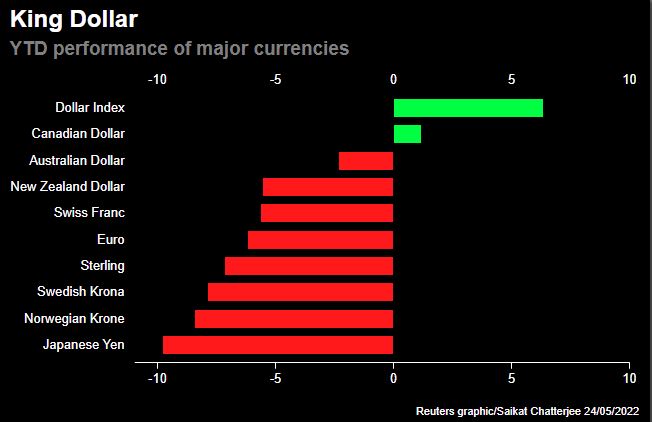 King dollar
Reporting by Saikat Chatterjee; additional reporting by Kevin Buckland in Tokyo; editing by Susan Fenton, Kirsten Donovan
Disclaimer: The views expressed in this article are those of the author and may not reflect those of Kitco Metals Inc. The author has made every effort to ensure accuracy of information provided; however, neither Kitco Metals Inc. nor the author can guarantee such accuracy. This article is strictly for informational purposes only. It is not a solicitation to make any exchange in commodities, securities or other financial instruments. Kitco Metals Inc. and the author of this article do not accept culpability for losses and/ or damages arising from the use of this publication.