LONDON, May 30 (Reuters) - Another 9% plunge in Turkey's lira this month and debt market danger gauges at levels last seen during the 2008 global crash have prompted investor concerns that a fresh crisis might be brewing in the country.

Whether President Tayyip Erdogan's government can avoid market turmoil, just five months after the last bout, will have big implications for his re-election prospects - and for a potential return of foreign investment if he loses.

The latest lira slump - it is down 20% this year - combined with soaring global energy and food prices means inflation is now at 70% and rising, while emergency measures Ankara adopted at the height of last year's turmoil are about to be seriously tested.

Authorities managed to avert a full-blown implosion in December by selling currency reserves and creating special bank accounts protecting savers and corporates from large lira falls in an effort to discourage hoarding of U.S. dollars, euros or gold.

But the appeal of these accounts, known as KKM, could be waning as critical summer 'rollover' dates approach. Meanwhile, the central bank's net reserves have tumbled to a negative $55 billion once FX 'swap' deals with Turkey's domestic banks are accounted for.

"Turkey is not a dead certainty for a big crisis but the odds of one are a long, long way from zero," said abrdn fund manager Kieran Curtis. "They are at risk of losing control of the situation".

Erdogan's government says fallout from the war in Ukraine has delayed efforts to balance the current account with a combination of credit, exports and targeted investments. The central bank says inflation will cool by year-end.

Still, the sky-high energy and food prices, along with the lira's drop and 50% domestic lending growth, are driving inflation towards triple digits. However on Thursday the central bank left interest rates untouched at 14%. read more

There are also renewed concerns about Turkey's testy relationship with the West after Erdogan said he would veto bids by Finland and Sweden to join NATO, accusing them of harbouring people linked to outlawed Kurdish separatists. read more 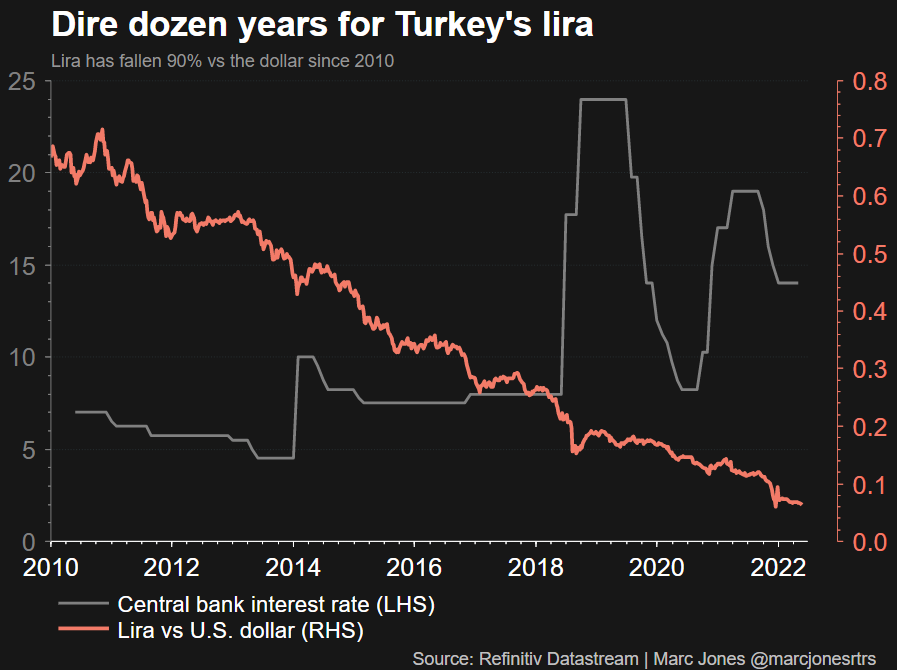 Investors are increasingly focused on whether individuals and companies will stick with the FX-protected KKM accounts.

The government and central bank don't publish detailed data about the programme. Calculations of four Turkish economists who ran the sums for Reuters show about $10 billion worth of deposits are up for redemption in July and another $20 billion in August.

JPMorgan's Zafar Nazim said it is "essential" to sustain depositors' interest in this scheme, amid deeply negative real rates. Ankara might therefore decide to let firms deposit more into KKM accounts and possibly offer new tax breaks - though that could create more problems, others believe.

"I don't think it is sustainable. You cannot just offer anyone a payout to protect against currency weakness," said Daniel Moreno, head of emerging markets debt at Mirabaud, which sold its last remaining Turkey bonds during last year's turmoil.

"(Things) seem to be getting worse by the day. But Turkey is not going to go down without a fight." 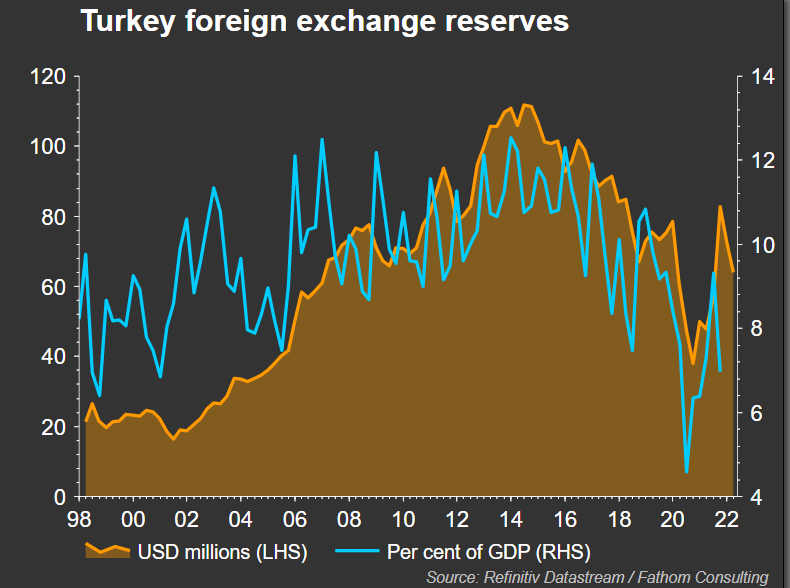 Few foreign investors remain big holders of Turkey's bonds following its problems in recent years. In a bid to turn things around, the government has been floating the idea of FX-protected bonds, but money managers worry capital controls might at some point trap them.

The market strains have exacerbated the woes of ordinary Turks, and households are struggling to pay rapidly rising bills, setting the stage for an unpredictable election due no later than June 2023.

Polls show Erdogan recovering some ground lost during the winter and his ruling AK Party remains ahead of rivals. But his approval ratings are near multi-year lows and surveys suggest he could lose his parliamentary majority and perhaps even the presidency to an opposition coalition.

Foreign investors say Erdogan's exit would flash a bullish signal by raising the prospect of a return to more orthodox economic policies.

Turkey's credit rating has slumped and its weight in the most closely-followed local currency emerging market debt index GBI-EM dropped to 1% from 10%.

Atanasov said most international investors were hoping for a change of leadership and policy, including a return to rate hikes, but that Erdogan would do his best to stay in power.

"The market will be quite sceptical until the very end," Atanasov said. "It will be an election that is extremely unclear - anything could happen."

Additional reporting by Nevzat Devranoglu; Editing by Jonathan Spicer and Gareth Jones
Disclaimer: The views expressed in this article are those of the author and may not reflect those of Kitco Metals Inc. The author has made every effort to ensure accuracy of information provided; however, neither Kitco Metals Inc. nor the author can guarantee such accuracy. This article is strictly for informational purposes only. It is not a solicitation to make any exchange in commodities, securities or other financial instruments. Kitco Metals Inc. and the author of this article do not accept culpability for losses and/ or damages arising from the use of this publication.