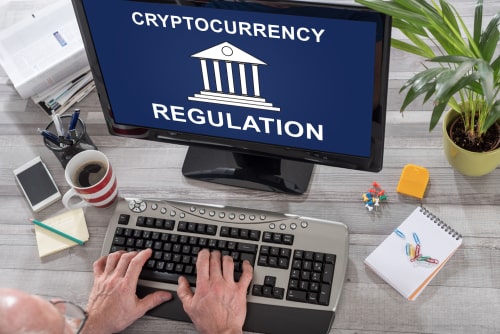 (Kitco News) A bipartisan Senate duo unveiled the widely anticipated sweeping crypto regulation on Tuesday. The bill provides some much-needed clarity for crypto markets and defines most digital assets as commodities, giving most of the oversight to the Commodity Futures Trading Commission (CFTC).

After months of work with the House and Senate, this regulation is the first extensive bipartisan attempt to provide legal clarity to crypto markets. And it comes at a time when calls for more regulation intensified after the collapse of the stablecoin TerraUSD.

The biggest takeaway from the bill is that most cryptocurrencies, including Bitcoin and Ethereum, are defined as commodities, which fall under the purview of the CFTC and not the SEC (the U.S. Securities and Exchange Commission).

More specifically, the legislation considers cryptocurrencies as "ancillary assets" and treats them as commodities.

According to the lawmakers, an "ancillary asset" is an "intangible, fungible asset that is offered, sold, or otherwise provided to a person in connection with the purchase and sale of a security through an arrangement or scheme that constitutes an investment contract."

However, there are a few exceptions, which is when the Howey Test and the SEC oversight will come in.

The Howey Test, which refers to the U.S. Supreme Court case for determining whether a transaction constitutes an "investment contract" and therefore should be considered a security, is often used for crypto. Under the test, an investment contract is an investment of money by entrepreneurs in a common enterprise with an expectation of profits from the efforts of others.

This is a major exception to the commodity rule in the new bill. And some of the ways cryptocurrencies can act as securities are having interest payments, dividend payments, profits, or revenue shares from "entrepreneurial or managerial efforts of others."

In April, SEC Chair Gary Gensler reiterated that "most crypto tokens are investment contracts under the Howey Test."

The new bill also sets out rules for "stablecoins" — digital assets pegged to traditional fiat currencies like the U.S. dollar. One of the conditions is that stablecoin issuers would be asked to keep high-quality liquid assets equal to the amount of all outstanding stablecoins. They would also be required to disclose the assets backing their tokens publicly.

The two senators' offices described this as a "landmark bipartisan legislation that will create a complete regulatory framework for digital assets that encourages responsible financial innovation, flexibility, transparency and robust consumer protections while integrating digital assets into existing law."

It is not likely the bill will be passed quickly because of the looming midterm elections in November.

The two Senators will be speaking at Consensus 2022 this week at a panel titled Washington's Crypto Awakening: The Lawmaker Town Hall.

In an interview with CNBC, Lummis and Gillibrand said the bill will have to go through at least three different Senate committees before moving for a full chamber vote.

The industry's reaction to the bill has been positive, with many touting the bill as a big step forward for the crypto space, preferring the CFTC oversight over the SEC.

"It provides much-needed clarity to U.S. regulatory bodies and industry participants on various aspects, reducing the overhang of uncertainty on the sector, which has been a headwind to its long-term maturity," said Jaime Baeza, CEO of ANB Investments. "Whilst it is positive that primary authority will rest with the CFTC (as opposed to the SEC), the most efficient way to regulate would be to establish a new, specific, crypto, self-regulatory organization, as other jurisdictions have done recently."

Those involved in the crypto space would like to see more clarity on what the potential collaboration between the CFTC, the SEC, and the FDIC would look like, Jeffrey Howard, OSL's head of North America business development and institutional sales, told Kitco News.

"This bipartisan bill should have the support of the majority of the cryptocurrency and investment industry. Although a new regulator devoted exclusively to digital assets is the preferred regulatory model, we at OSL have always believed that the digital asset industry would be regulated by a combination of federal agencies, namely the SEC, CFTC, and FDIC," Howard said. "The proposed bill's definition of ancillary assets is certainly a step in the right direction, and we welcome further evolution of U.S. regulators' views on this burgeoning asset class."

The crypto mining industry is also starting to feel some regulatory heat, especially in the state of New York. On Friday, New York State Senate passed a bill that would put a two-year moratorium on new permits and renewal of existing permits for cryptocurrency mining facilities that use carbon-based fuel.

The bill would only impact mining operations that use energy-intensive proof-of-work methods that get their power from plants that burn fossil fuels.

After passing in the Senate, New York Governor Kathy Hochul can now sign the bill into law or veto it.

Many crypto proponents have criticized the legislation, including Ethereum founder Vitalik Buterin.

"The government picking and choosing which specific applications are an okay use of electricity or not is a bad idea. Better to just implement carbon pricing, and use some of the revenues to compensate low-income users," Buterin tweeted.

Ultimately I agree with this (that is, I oppose banning PoW). The government picking and choosing which specific applications are an okay use of electricity or not is a bad idea. Better to just implement carbon pricing, and use some of the revenues to compensate low-income users. https://t.co/NnBzmv5mYz

In other news, Bloomberg reported that the SEC is investigating whether Binance was infringing on securities laws when it sold its BNB token during its initial coin offering (ICO) in 2017. The SEC is examining whether the ICO could be considered the sale of a security.