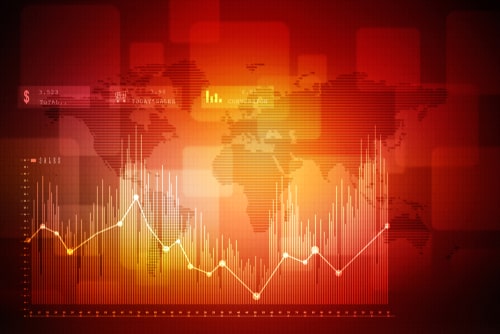 (Kitco News) Markets across the board are reeling as wild price swings dominate stocks, crypto, and gold. Analysts warn of panic selling as markets re-price expectations for a more aggressive Federal Reserve.

Investors are pre-reacting to the Federal Reserve's interest rate decision scheduled for Wednesday following a surprising hot inflation data out of the U.S.

Inflation is now running at an annual pace of 8.6%, with experts like Mohamed El-Erian, chief economic advisor at Allianz, stating that for inflation to peak, the Fed will need to get more aggressive.

The U.S. dollar reacted positively to the news, with the U.S. dollar index — a measure that tracks the greenback against six other major currencies — trading near 20-year highs of 104.97.

The U.S. Treasury yields also rose, adding more pressure to assets like gold. Two-year Treasury yields advanced to a 15-year high, touching 3.25%, while 10-year yields climbed to 3.3% —the highest since 2011. The 2-year and the 10-year even briefly inverted on Monday, which is known as curve inversion and is often viewed as a precursor to economic recession.

The crypto space got hit the most as panic selling accelerated, with Bitcoin tumbling to $22,725.66 on Monday — the lowest level since December 2020. At the time of writing, Bitcoin was at $23,393, down nearly 22% in the last seven days. The world's second-largest cryptocurrency was hit even worse, with Ethereum dropping to $1,182 — the lowest level since January 2021. In the last week, Ethereum dropped 31.3%

The crypto selloff was widespread and entered into a panic phase when crypto lending company Celsius said it was halting all transactions on its platform.

"Due to extreme market conditions, today we are announcing that Celsius is pausing all withdrawals, Swap, and transfers between accounts," the company said Sunday. "We are taking this necessary action for the benefit of our entire community in order to stabilize liquidity and operations while we take steps to preserve and protect assets."

.@CelsiusNetwork is pausing all withdrawals, Swap, and transfers between accounts. Acting in the interest of our community is our top priority. Our operations continue and we will continue to share information with the community. More here: https://t.co/CvjORUICs2

Binance, the world's largest crypto exchange by trading volume, also added fuel to the fire when it temporarily paused Bitcoin withdrawals due to "a stuck transaction causing a backlog." However, shortly after, withdrawals were resumed.

Over the weekend and Monday, the crypto space lost more than $200 billion off its market cap.

"Selling in crypto was driven by fear of contagion. You have major crypto company Celsius pause withdrawals. No one saw this coming. This leads to fears that certain parts of the crypto-verse might not be able to withstand of tightening of financial conditions. That should be very troubling for cryptos as we see further technical feeling kick in," OANDA senior market analyst Edward Moya told Kitco News.

"Inflation is ramping up rather than slowing down. I think this is a bigger contributor to the decline we have seen, as it results in a more hawkish Federal Reserve - they are now forced to remove more liquidity from the market in order to bring down inflation. When liquidity is removed, risk-on assets are hit the hardest, which includes crypto," Sotiriou said.

Amid this downtrend, the next support level to watch is $20,000, Moya noted.

There is also a risk of falling to $19,000 after the $27,000 level failed, according to Fairlead Strategies founder and managing partner Katie Stockton. "A breakdown (consecutive weekly closes below $27.2K) would increase the risk to secondary support in the $18.3K-$19.5K range," Stockton said.

The precious metal is struggling as investors are still digesting inflation numbers and renewed concerns over another slowdown in China due to the latest COVID outbreak in Beijing and Shanghai, Moya said.

"We are seeing significant weakness for gold. China's COVID situation could lead to a much more extended period of supply chain issues that will feed into that inflationary fear markets are battling," Moya said Monday.

Plus, there is a reset of expectations around the Federal Reserve's already aggressive rate hikes, which are now viewed as not enough to get inflation under control.

"There is a belief that since markets are still functioning properly and there are no issues in credit markets yet, you are not going to see the Fed change course anytime soon. And now it seems rate hikes might be greater than everyone was expecting. For non-interest-yielding gold, it is bad news," Moya explained. "Markets are scrambling to price in more aggressive Fed tightening."

The expectation was that the Fed could slow down its rate hikes by September or October. And this is now changing.

"There is going to be significantly more volatility once we get past the Fed. There is a big debate about how aggressive they will be and how they will go about signaling. That could still be bearish for gold," Moya said. "Aggressive tightening might be needed into September and for the rest of the year. Before, the Fed was not able to commit beyond Jackson Hole."

In the meantime, gold remains at risk of a more significant selloff. The support at $1,800 an ounce might not hold, and the gold market could see a retreat towards $1,750 an ounce, Moya added. "Market anticipating that selling pressure could remain pretty aggressive here. Gold is vulnerable to $1,750. And it should start to become more attractive around this level," he said.

A move below $1,810 an ounce could trigger substantial selling pressure, noted strategists at TD Securities. "A technical breakdown could be the catalyst needed to squeeze a massive amount of complacent length in gold," they wrote Monday.

Stocks also had a sell-everything kind of day as the S&P 500 fell back into the bear market territory, down 2.7%, the Dow dropped nearly 2%, and the Nasdaq fell 3.5% on the day.