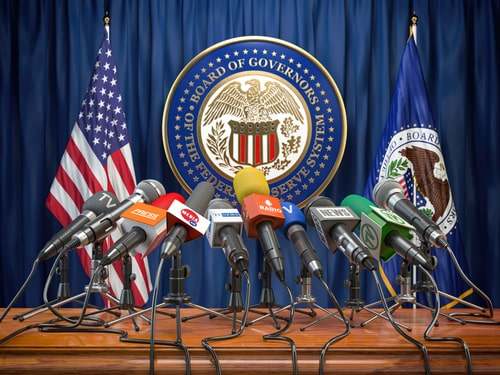 (Kitco News) All eyes were on Federal Reserve Chair Jerome Powell after the U.S. central bank raised rates by 0.75% — the biggest increase since 1994. And he did not hold back - stating that another 0.75-percentage-point hike is possible in July and that the so-called 'softish landing' will now depend more on external factors like commodity prices.

"We anticipate that ongoing rate increases will be appropriate. The pace of those changes will continue to depend on the incoming data and the evolving outlook for the economy. Clearly, today's 75 basis point increase is an unusually large one, and I do not expect moves of this size to be common. From the perspective of today, either a 50 basis point or a 75 basis point increase seems most likely at our next meeting," Powell told reporters Wednesday.

The decisions on future rate hikes will be made meeting by meeting, especially after inflation continues to surprise the Fed, Powell noted.

"Over the coming months, we will be looking for compelling evidence that inflation is moving down," he said. "Inflation obviously surprised to the upside over the past year, and further surprises could be in store."

The Fed chair also described the monetary policy regime by the end of this year as "modestly restrictive." That would put the Fed's policy rate in a range between 3%-3.5% in six months and between 3.5%-4% next year.

"That's generally what people see as an appropriate path to get inflation under control," Powell said. "We need to show results but also be flexible to incoming data."

Another key message Powell shared was that getting inflation down and achieving the so-called "softish landing" (without triggering a recession) is becoming more challenging.

"I do think it's possible. [But] I think that events of the last few months have raised the degree of difficulty, created great challenges. And again, the answer to the question, can we still do it? There's a much bigger chance now that it will depend on factors that we don't control. Fluctuations and spikes in commodity prices could wind up taking that option out of our hands," he stated.

The external factors out of the Fed's hands are commodity prices, the war in Ukraine, and supply chain issues.

Powell added that the Fed had been expecting to see progress on inflation but saw the opposite in May's data, which impacted the central bank's decision to go with the higher rate hike versus the previously stated 50-basis-point increase.

"Our guidance is always conditional on what happens. It is an unusual situation to get [inflation] data that close to our meeting … that would change the outcome. In my 10+ years at the Fed, I've seen it two or three times. Not something that comes up a great deal," he clarified.

Gold reacted very positively to the oversized rate hike, which was largely priced in by the markets earlier this week following hotter-than-expected inflation data from May. August Comex gold futures were trading at fresh daily highs, up $21 on the day and at $1,834.60 an ounce.

Markets were happy to see the Fed taking inflation seriously, according to analysts. "The main takeaway for investors is that inflation has the Fed's attention … The rapid (and flexible) change from 0.5% up to 0.75% on very short notice showed a new willingness to fight inflation with actions rather than words," said Independent Advisor Alliance CIO Chris Zaccarelli. "The stock market – and the economy – still face considerable headwinds, so I'm not convinced the worst is behind us, but at least in the short run, we may be entering a more optimistic phase in this market cycle."