Central banks opt for shock and awe to tame inflation

LONDON, June 16 (Reuters) - The Federal Reserve has just delivered its biggest interest rate rise in over a quarter of a century and even the hitherto dovish Swiss National Bank has taken markets by surprise with an aggressive rate hike.

Here's a look at where policymakers stand in the race to contain red-hot inflation. Norway's Norges Bank was the first big developed economy to kick off a rate-hiking cycle last year and has raised rates three times since September. It is expected to increase its 0.75% rate again on June 23 and plans seven more moves by end-2023. 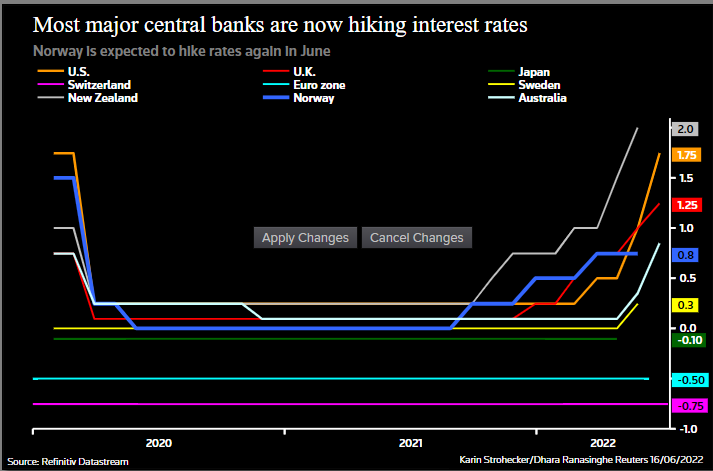 The Reserve Bank of New Zealand is also one of the world's most hawkish central banks, raising the official cash rate by 50 basis points (bps) to 2% on May 25, a level not seen since 2016. That was its fifth straight rate hike read more .

It projected rates to double to 4% over the coming year and stay there until 2024. New Zealand inflation reached a three-decade high of 6.9% in the year to Q1, versus a 1-3% target. 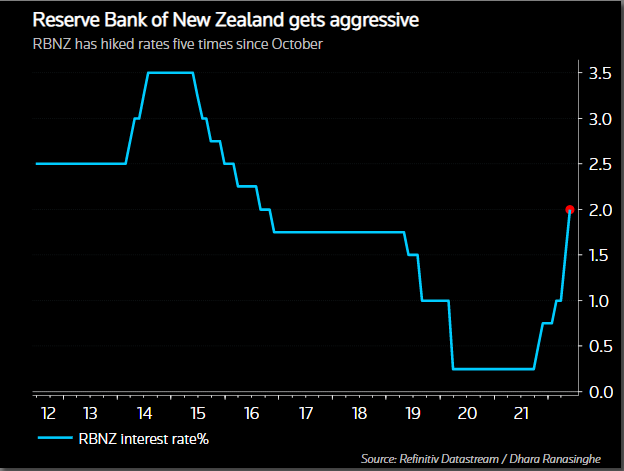 New Zealand among the most aggressive central banks

The Bank of Canada delivered a second consecutive 50-bps rate increase to 1.5% on June 1, and said it would "act more forcefully" if needed. read more

With April inflation at 6.8%, Governor Tiff Macklem has not ruled out a 75-bps or larger increase and says rates could go above the 2%-3% neutral range for a period.

The Bank of England raised interest rates by a quarter of a percentage point on Thursday and said it was ready to act "forcefully" to stamp out dangers posed by an inflation rate heading above 11%. read more

The British benchmark rate is now at its highest since January 2009. The BoE, the first major central bank to tighten monetary policy after the COVID-19 pandemic, has now raised borrowing costs five times since December. 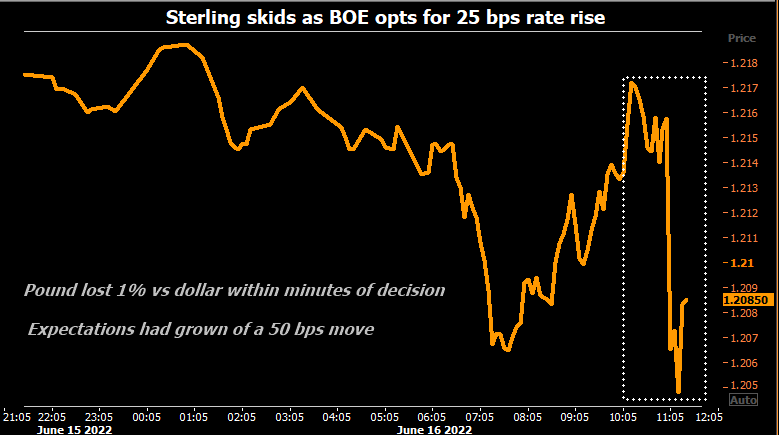 The Federal Reserve raised the target federal funds rate on June 15 by three-quarters of a percentage point to a range of between 1.5% and 1.75%.

It acted days after data showed 8.6% annual inflation and has since triggered a market frenzy with expectations growing of even more aggressive responses in coming months.

The Fed is also reducing its $9 trillion stash of assets accumulated during the pandemic. 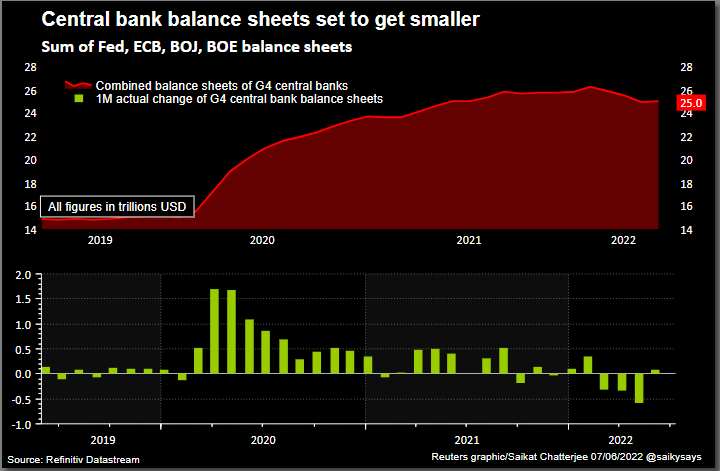 With the economy recovering smartly and inflation at a 20-year high of 5.1%, the Reserve Bank of Australia raised rates by a surprise 50 bps on June 6. It was the RBA's second straight move after insisting for months policy tightening was way off. read more

Money markets price in another 50 bps rise in July.

A late-comer to the inflation battle, Sweden's Riksbank raised rates to 0.25% in April in a quarter-point move. With inflation at 6.4%, versus its 2% target, the Riksbank may now opt for bigger moves.

Having said as recently as February that rates would not rise until 2024, the Riksbank expects to hike two or three more times this year.

Now firmly in the hawkish camp, and facing record high inflation, the ECB said on June 9 it would end bond-buying on July 1, hike rates by 25 bps that month for the first time since 2011 and again in September, likely putting an end to negative rates.

But without details on a tool to prevent borrowing costs for Southern European nations diverging too much above those of Germany, markets will test the ECB's resolve. 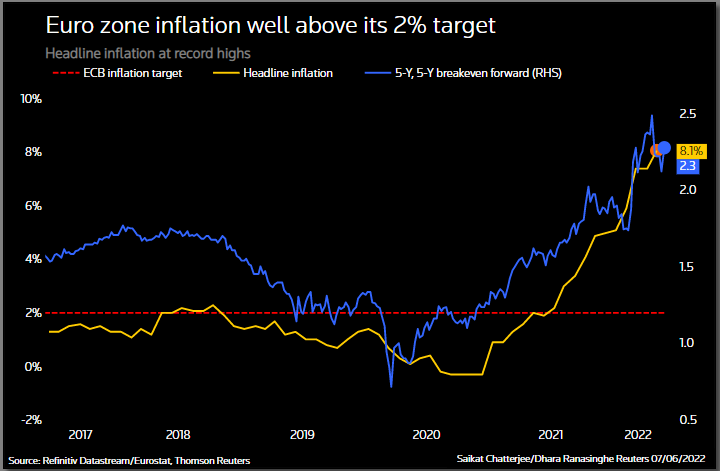 Recent franc weakness has contributed to driving inflation towards 14-year highs and SNB governor Thomas Jordan said he no longer sees the franc as highly valued. That has opened the door to bets on more rate hikes; a 100 bps move is now priced for September.

That leaves the Bank of Japan as the holdout dove.

Japanese April core consumer prices rose 2.1% from a year earlier, exceeding the BOJ's target for the first time in seven years. Still, BOJ officials see such cost-push inflation as temporary so there are no signs it will signal a hawkish pivot at its June 17 meeting. 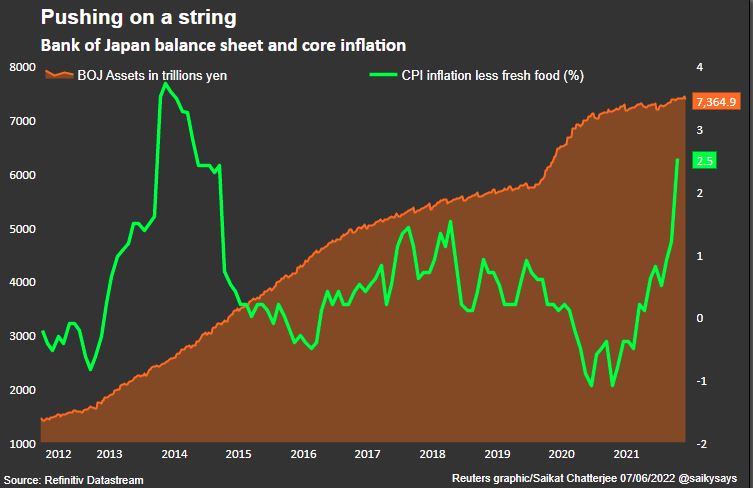 BOJ and JP CPI
Reporting by Sujata Rao, Dhara Ranasinghe and Yoruk Bahceli Additional reporting by Tommy Wilkes and Saikat Chatterjee Editing by Mark Potter
Disclaimer: The views expressed in this article are those of the author and may not reflect those of Kitco Metals Inc. The author has made every effort to ensure accuracy of information provided; however, neither Kitco Metals Inc. nor the author can guarantee such accuracy. This article is strictly for informational purposes only. It is not a solicitation to make any exchange in commodities, securities or other financial instruments. Kitco Metals Inc. and the author of this article do not accept culpability for losses and/ or damages arising from the use of this publication.
new