Gold is doing 'spectacular job' but price drop to $1,800 not ruled out, here's why 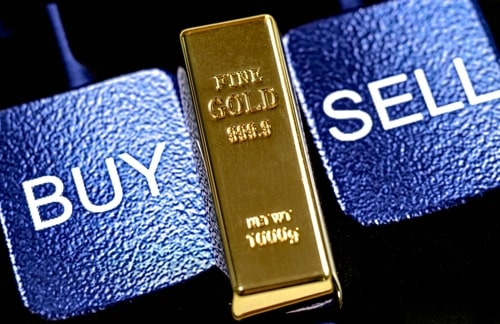 (Kitco News) Gold surprised this week with its resilience and steadiness after an oversized 75-basis-point hike from the Federal Reserve and massive volatility across many markets. But analysts don't see a major rally developing in gold in the short-term, and they are not even ruling out a move back to $1,800.

The precious metal's reaction to the Fed's decision to raise rates by 75 basis points — the biggest increase since 1994 — has been very encouraging. Fed Chair Jerome Powell also signaled that another 75bps is possible in July, adding that the so-called 'softish landing' will now depend more on external factors like commodity prices.

After digesting the information, the stock market saw a sharp drop, while gold rallied around $40 on Thursday. However, the rally was short-lived as August Comex gold futures retreated to 1,841.70 an ounce Friday, down 0.44% on the day.

"Gold's current relative stellar performance is surprising, as it usually tracks the Fed's policy rates and real interest rates intently," TD Securities global head of commodity strategy Bart Melek. "And, the market hiked its year-end Fed Funds expectation from 2.7% in mid-May to 3.6% now. At the same time, the 10-year real rate, which is the usual driver, jumped well over 50bps from a month earlier to 0.69% and some 180 bps higher from the start of the year."

The performance of gold versus that of other markets stands out, said Gainesville Coins precious metals expert Everett Millman. "Other markets you look at, even some safe havens like the U.S. dollar, have been remarkably volatile. Gold has had relatively low volatility. It is a sign of strength and gold doing its job — holding steady even amid turmoil across other assets," Millman told Kitco News.

Year-to-date, gold is largely flat, up 0.5%. Yet, Millman pointed out that this resilience does not mean a rally is just around the corner.

"We've seen gold rally nice and then pull back. I expect that to continue up until the next Fed meeting in July. Gold will be range-bound and stuck trading sideways until we find out whether the Fed will go through with another large rate hike," Millman said. "Rate hikes are supposed to be bad for gold. But when inflation is this high, it will take many rate hikes for the Fed to get to where the real rate of interest rate is neutral. And that is what gold cares about. Maybe next year, they will get there."

He added that even though inflation remains one of the primary drivers for gold, growing recession risk could encourage some additional gold-buying if investors continue to fear losses in other assets.

Gold has been doing "a spectacular job," described Melek. But that doesn't mean the precious metal doesn't correct here and returns back towards $1,800. "It won't be a rout but a modest correction," he said.

The thinking behind Melek's projection is a persistent Fed, which won't give up aggressive rate hikes at the first sign of economic trouble. "My suspicion is that the Fed won't change its mind any time soon," he said. "It is very likely there will be many more aggressive hikes in the face of strong inflationary forces, which will likely send gold back to the May lows."

And that means a return to the $1,824-$1,808 range in the near term. "Still think we can go below $1,800 by the end of the year. It is too early to say that the Fed will flake at the first sign of trouble. Could be in a situation where growth starts to slow, but we won't see a significant move in inflation until September or October."

Out of all the macro data on the docket for next week, housing will be a vital element to keep a close eye on. The key thing to watch is the impact of the Fed's higher rates on the economy, including the housing market, said ING chief international economist James Knightley.

"With the Federal Reserve signaling it has a strong stomach for the fight against inflation, we have to expect further significant interest rate hikes in coming months. But by going harder and faster into restrictive territory, there is a greater risk of a hard landing and a potential recession," Knightley said in a note Friday. "The housing market is particularly vulnerable given prices are up nearly 40% nationally since the start of the pandemic due to stimulus-fuelled demand vastly outstripping the limited supply of properties for sale."

Another event to monitor will be Powell's testimony before the Senate Banking, Housing, and Urban Affairs Committee on Wednesday and the House Financial Services Committee on Thursday.