June 21 (Reuters) - Wall Street's major indexes climbed on Tuesday as investors scooped up shares of megacap growth and energy companies that were hammered in a rout last week on worries over a global economic downturn.

All the 11 major S&P sectors advanced in the short-term rebound. The S&P 500 and the Nasdaq are still in bear market, with the benchmark index down 21.6% from its record closing high on Jan. 3.

"We are still viewing this as a rally in a bear market. Right now this is just another one-day wonder and investors have seen this movie before," said Ken Mahoney, chief executive officer of Mahoney Asset Management.

"So while we have this rally today, I am looking at the volatility index that is down just slightly, it is not really buying this. There is still quite a bit of nervousness around the markets."

The CBOE volatility index (.VIX), also known as Wall Street's fear gauge, was down to 29.94 points, its lowest level since June 15, but still way above its long-term average of 19.6 points. 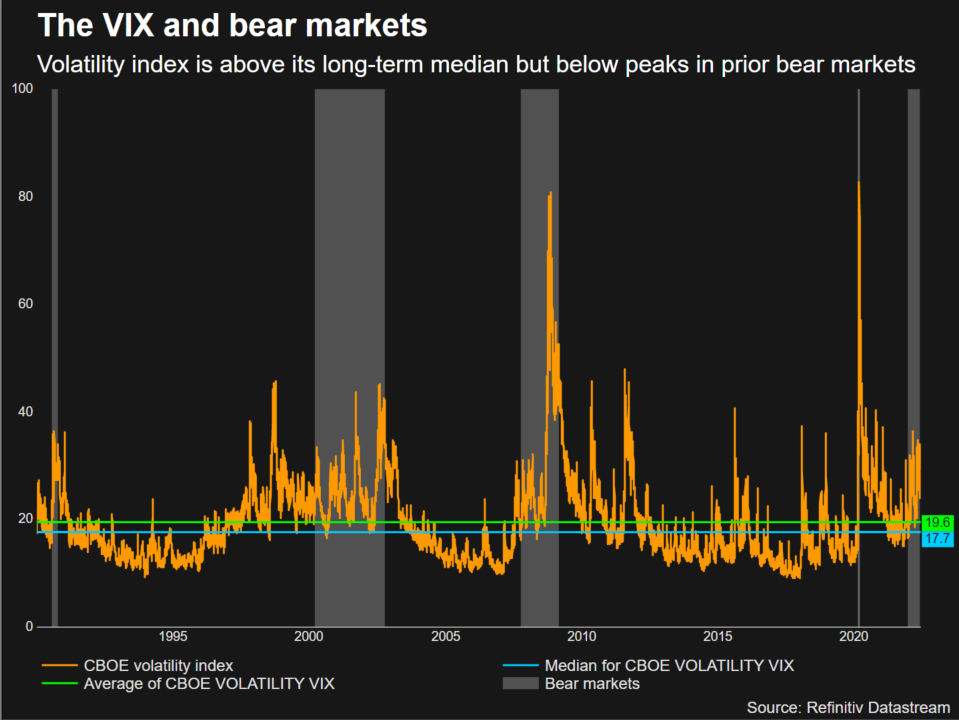 The S&P 500 index had in the previous session posted its biggest weekly percentage drop since March 2020 as investors feared aggressive steps by global central banks to fight inflation would slow economic growth.

Markets have priced in further rate hikes in July and September amid growing doubts if the U.S. central bank can engineer a soft landing for the economy and avoid a recession.

Goldman Sachs now expects a 30% chance of the U.S. economy tipping into recession over the next year, up from its previous forecast of 15%. read more

"The market already may have priced in a shallow recession... you had negative GDP in Q1, so it is possible the second quarter is negative, in which case the recession could potentially be in the rear-view mirror," Thomas Hayes, managing member of Great Hill Capital in New York said.

All eyes are now on Fed Chair Jerome Powell's testimony to the Senate Banking Committee on Wednesday for clues on future interest rate hikes.

Kellogg Co (K.N) climbed 4.1% after the breakfast cereal maker said it was splitting itself into three separate companies with a focus on snacking. read more

The S&P index recorded one new 52-week highs and 30 new lows, while the Nasdaq recorded 34 new highs and 69 new lows.

Reporting by Devik Jain and Anisha Sircar in Bengaluru; Editing by Sriraj Kalluvila and Arun Koyyur
Disclaimer: The views expressed in this article are those of the author and may not reflect those of Kitco Metals Inc. The author has made every effort to ensure accuracy of information provided; however, neither Kitco Metals Inc. nor the author can guarantee such accuracy. This article is strictly for informational purposes only. It is not a solicitation to make any exchange in commodities, securities or other financial instruments. Kitco Metals Inc. and the author of this article do not accept culpability for losses and/ or damages arising from the use of this publication.
new