LONDON, June 21 (Reuters) - The Japanese yen plunged on Tuesday to the lowest levels versus the U.S. dollar since October 1998, as the Bank of Japan's ultra-loose monetary policy stance continued to weigh.

The yen dropped 0.9% to a new 24-year low of 136.330 per dollar , extending losses which have already seen it shed more than 18% of its value versus the greenback this year.

"The trend is your friend after the Bank of Japan last Friday stuck to its ultra-dovish policy mantra," said Kenneth Broux, an FX strategist at Societe Generale.

The currency lost more ground after the Bank of Japan on Friday dashed any expectations of a change in policy and continued to stand alone in its commitment to ultra-easy monetary settings.

Instead it has been ramping up bond-buying to hold 10-year yields in a targeted 0%-0.25% range. But despite its efforts, the yield remains at the upper end of that target

Earlier in the day Japanese Prime Minister Fumio Kishida effectively gave the green light to sell yen when he said the BoJ should maintain its ultra-loose monetary policy.

He brushed aside calls for the policy to be tweaked to target rising living costs. read more

The yen's decline was also accelerated by some stop losses broken around the 135.60 levels, according to analysts, who noted New York traders had been absent on Monday, a U.S. public holiday.

The yen has lost more than any other major currency against the greenback, as the BOJ's dovish policy stance stands in stark contrast to the general hawkishness among global policymakers. 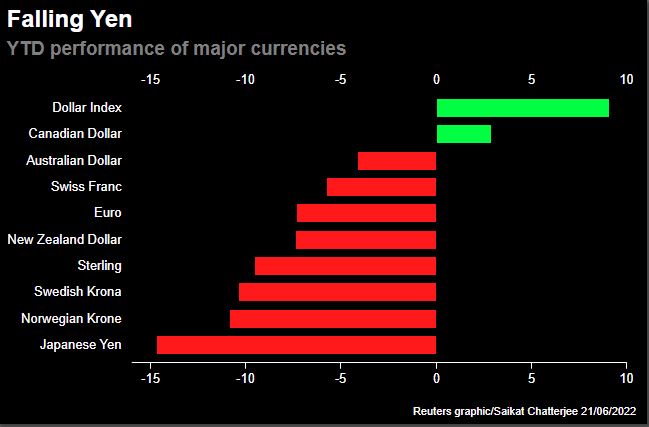 falling yen
Reporting by Samuel Indyk; Writing by Saikat Chatterjee; Editing by Sujata Rao
Disclaimer: The views expressed in this article are those of the author and may not reflect those of Kitco Metals Inc. The author has made every effort to ensure accuracy of information provided; however, neither Kitco Metals Inc. nor the author can guarantee such accuracy. This article is strictly for informational purposes only. It is not a solicitation to make any exchange in commodities, securities or other financial instruments. Kitco Metals Inc. and the author of this article do not accept culpability for losses and/ or damages arising from the use of this publication.
new