(Kitco News) - Today has been flash PMI day across the major nations and it has not been the best of readings all around. In the U.K. manufacturing PMI for June pointed at 53.4 vs analyst expectations of 53.7. This is still above the expansion 50 level but it is just shy of the analyst and economist forecasts. The PMI's composite index held at 53.1 in June, above the median forecast of 52.6 in a Reuters poll of economists and unchanged from May.  Chris Williamson, chief business economist at S&P Global Market Intelligence noted "The economy is starting to look like it is running on empty,".

In Europe's largest economy Germany, the flash PMI for manufacturing dropped to 52.0 from May's final reading of 54.8, below the 54.0 analyst consensus. Phil Smith, economics associate director at S&P Global, said the June flash PMI data showed that Germany's economy had lost virtually all the momentum gained from the easing of coronavirus-related restrictions, with growth in the service sector cooling sharply for the second month in a row in June.

ING Bank painted a sour picture of the European economic outlook saying "Regarding the first, the PMI leaves no doubt, the economy is slowing markedly. Manufacturing, in particular, is performing poorly on supply chain problems and falling demand. That is despite backlogs of work still being high, which means that the underlying current development is even bleaker."

In a reaction to the data, EUR/USD fell through 1.05 around 98 pips. The chart had been moving higher prior to the release but on the bigger timeframes, the downward bias had been firm. The question now is how the ECB will react to the news. There has been much talk about the hiking cycle but could this be a speed bump for the central bank? 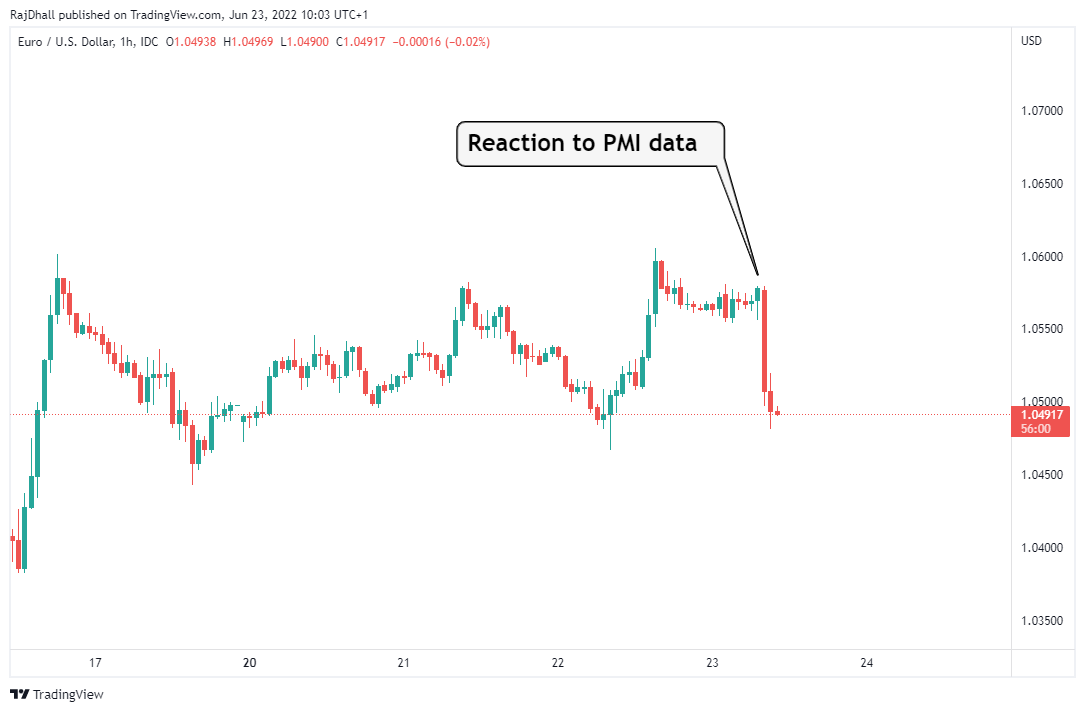