(Kitco News) - Chile’s Codelco was the world’s largest copper mining company in Q1 2022 (based on attributable copper tonnes). Freeport-McMoRan solidified its second position in the ranking due to production increase at Grasberg.

Freeport-McMoRan sits second with 367 thousand tonnes of copper produced in Q1 2022, an increase compared to Q1 2021 primarily due to the ramp-up of underground production at the Grasberg minerals district in Indonesia, which continued to advance on schedule.

Glencore sits third as its own sourced copper production of 257,800 tonnes in Q1 2022 was 43,400 tonnes (14%) lower than Q1 2021, reflecting temporary geotechnical constraints at Katanga (14,000 tonnes), the basis change arising from the sale of Ernest Henry in January 2022 (11,000 tonnes) and lower copper units produced within Glencore’s zinc business.

BHP landed fourth with 250 thousand tonnes of copper produced in Q1 2022 as its Chilean assets experienced a challenging operating environment due to a reduction in the company’s operational workforce as a result of a significant increase in COVID-19 cases in Chile, particularly the Omicron variant, and the mitigation measures implemented.

Southern Copper is fifth. The company’s copper production registered a decrease in Q1 2022 and amounted to 214 thousand tonnes. Lower production was primarily driven by the stoppage of operations at Cuajone, as well as decrease in ore grades and recoveries at its other operations.

China’s Zijin Mining, which controls the largest volumes of copper and gold resources overseas among Chinese companies, ranked sixth in Q1 2022, with its mine-produced copper of 194 thousand tonnes reported for Q1. The company increased its quarterly copper output following the successful production commencement of key projects such as the Upper Zone of the Cukaru Peki copper and gold mine in Serbia, the Kamoa-Kakula copper mine and the Julong copper mine in Tibet.

Polish mining giant KGHM landed seventh in Q1 2022. The company’s production of payable copper was higher by 4 percent (compared to the first quarter of 2021) and amounted to 193 thousand tonnes. Higher production was due to higher availability of purchased metal-bearing materials and the higher availability of production lines in KGHM Polska Miedz S.A. as well as higher copper recovery and higher throughput in Sierra Gorda. Higher production was also recorded by the Robinson mine.

First Quantum sits eighth. The company’s total copper production for the first quarter was 182,210 tonnes, down compared to Q1 2021 as all three of the company’s main operating sites experienced lower production.

Rio Tinto sits ninth as its mined copper production of 125 thousand tonnes was 4% higher than the first quarter of 2021 due to higher recoveries and grades at Kennecott, partly offset by lower grades at Oyu Tolgoi and lower throughput at Escondida.

Antofagasta is closing the top 10 list. The company’s attributable copper production of 96 ktonnes in Q1 2022 was lower than in the same quarter in 2021 due to the expected temporary reduction in throughput at Los Pelambres because of the drought and lower grades at Centinela Concentrates. 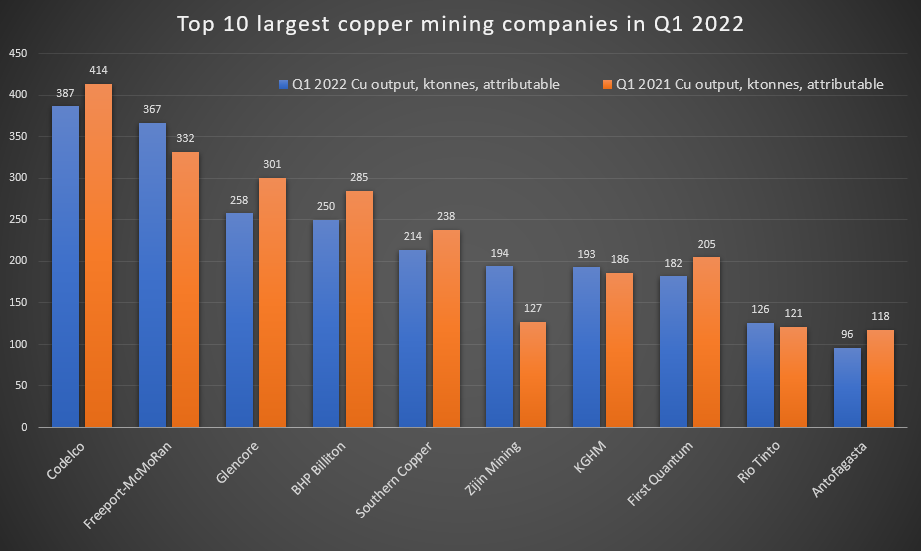 New York to charge crypto companies for their supervision