What if the Fed can't stop inflation? This is when Bitcoin's bear market could reverse 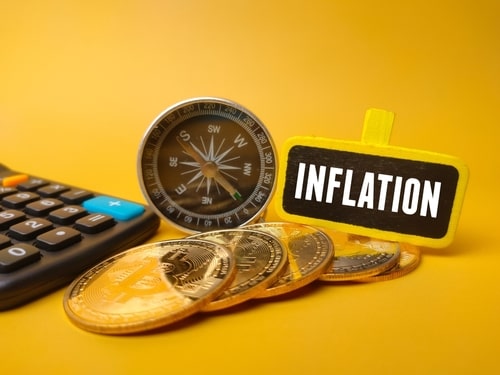 (Kitco News) Even the Federal Reserve admits it can't lower food or gas prices just by hiking rates. And if it fails, a rate hike reversal could be not that far off, according to Ledn co-founder and CSO Mauricio Di Bartolomeo, who sees Bitcoin's bear market reversing if that happens.

Inflation is soaring, and the only thing the Federal Reserve can do to gain control is to destroy the purchasing power of the consumer by tightening financial conditions, Di Bartolomeo told Kitco News.

"And that's exactly what they're doing. The idea is that having fewer of us buy things creates competition among the retailers. And that puts a bit of a lid on inflation. That's a concept that has been tried and tested in the past," the co-founder of the Canada-based crypto lender said.

However, that is far from the whole inflation narrative. "We are in an active conflict that is disrupting the oil production capacity globally. So the Fed can raise rates all it wants. But it's not gonna be able to stop oil from running higher until they deal with the problems in Russia," Di Bartolomeo noted.

And since the Fed started raising rates, the markets have been crashing, with crypto, equities, and even real estate starting to suffer. The signs are pointing toward a recession.

"You're starting to see a breed of layoffs. Credit card debt is getting racked up in the United States, and the savings rates have plummeted. So essentially, all the COVID impact that increased savings and paid down loans has been completely reversed," Di Bartolomeo pointed out.

There might come a time this year when the Fed might be raising rates "into a wall" as inflation continues to rise due to external factors.

"Gasoline filters to all other commodities. Everything costs more when oil costs more. And since they cannot stop this by raising rates, it's going to be really hard for the Fed to put a lid on inflation," Di Bartolomeo said. "It's possible that the Fed won't be able to stop food price inflation and gasoline inflation. So what can they do?"

This type of solution is often practiced in countries with hyperinflation problems. And the U.S. might be forced to embrace some of those practices to appease the people before the November 2022 midterm elections.

"This is not new. I grew up with subsidized fuel and food my whole life in Venezuela," he said. "And when the Fed realizes that they can't really do anything about inflation, the U.S. might start doing subsidies on some of these products."

The Fed could also be forced to reverse some of its rate hikes to get the economy moving again. "There's a decent probability of that happening before the November midterms because nobody wants to go into an election with an angry population," Di Bartolomeo said.

If those two things happen, the outlook for Bitcoin is a positive one, he added. This would mark a strong bear market reversal, with Bitcoin currently trading 69% lower than its November peak of $69,000.

The market has been trying to put the Fed into a corner with dramatic selloffs in response to the Fed's hawkish stance. If it succeeds, things will turn a corner for all asset prices.

"From my experience of how closely tied economic cycles are to political cycles, I would think that that should happen sometime before November. In terms of price, I wouldn't be surprised if Bitcoin closes the year higher than where we are right now," Di Bartolomeo said. "However, I don't really have a clear picture on how much more downside we have until that happens."

And despite the massive selloff that briefly took the world's largest cryptocurrency down to $17,000 last weekend, the inflation-hedge properties are part of Bitcoin's arsenal.

Di Bartolomeo also sees the current price of Bitcoin, which is around $21,000, as a solid entry point for people with medium to long-term investment time frames and the right risk tolerance.

"While the last six months have been volatile, Bitcoin continues to act as a significant store of value even in highly adverse market conditions, and we've learned from the recent fallout that not all crypto, like not all crypto lenders, are equal," he said.

And like many in the crypto industry, Di Bartolomeo is encouraged by the regulation push that is seen coming from Washington with the Lummis-Gillibrand crypto bill.

"When everyone's making money, nobody's really worried about regulation because everybody's doing great. But it's when things roll over people start to want regulation," he said. "The same way that is happening right now with inflation. For this brief moment, the U.S. voting population actually wants the Fed to raise rates. Similarly, politicians feel that if people don't get the point of regulation now, they will not get it. They can do these things based on recent events."

The crypto community is beginning to understand that lack of regulation is stopping many people from entering the crypto space, which is why regulation will help with adoption.

"Companies like ourselves that offer lending services have to compete against some DeFi protocols that are not held to the same standards that we hold our operations to. We are out there telling you exactly what the risks are, how we're doing things, whereas this other platform's just offering you a better rate, and most people don't want to read the fine print," he said. "That's a challenge. And companies that are good actors that have been self-regulating themselves since day one have been waiting for this."

Ledn provides financial services for people who own Bitcoin and digital assets. They were the first ones to announce a Bitcoin mortgage product.

"What our product does is that it takes Bitcoin as collateral and lets clients buy a house of equal value. We've partnered with the brokerage in Ontario, Canada, to sell the product. We are the underwriters and the servicers of the mortgage," Di Bartolomeo said. "Ledn utilizes only Bitcoin and USDC, does not engage in DeFi protocols with client assets to generate yield, and only partners with institutions following a rigorous due diligence process."

Di Bartolomeo spoke to Kitco News on the sidelines of the Consensus 2022 conference held in Austin, Texas, between June 9-12. He also contributed additional commentary following a meltdown in the crypto space after the conference.