Is the gold vs bitcoin debate still a thing?

(Kitco News) - Is this the end of the gold vs bitcoin debate?

The crypto sector has had a massive capitulation of late with some hedge funds closing down, brokers stopping withdraws, and some other serious issues. Prior to the recent price drop, there were many research notes looking at the case for bitcoin to be treaded as a safe haven play over gold. We are not really hearing too much of this now. Gold has serious uses in the economy. Central banks use gold, and many investment banks and hedge funds allocate gold in their portfolios and vaults. Of course, some use crypto too.

In Feb 2009, U.S. investment bank analysts at JP Morgan believe that capital inflow in Bitcoin could exceed private sector investment in Gold, estimated at $2.7 trillion. This could still be the case long-term but at the moment it seems like a long way away. In defense of the report, the Analysts said they believe that Bitcoin volatility needs to drop and once the asset is substantially less volatile, it could gain value.

At the start of the year, another U.S. investment bank Goldman Sachs predicted that the price of bitcoin could reach $100,000. The global investment bank believed that bitcoin will continue to take market share away from gold as cryptocurrency adoption grew. Zach Pandl, co-head of global foreign exchange strategy said "Bitcoin may have applications beyond simply a ‘store of value’ — and digital asset markets are much bigger than bitcoin." He also added, "We think that comparing its market capitalization to gold can help put parameters on plausible outcomes for bitcoin returns."

The two offer very different propositions. Gold seems to be more a store of value and a safe haven asset. While Bitcoin could have massive applications in the future and is more speculative at the moment. The stability in gold has proved invaluable at a time when Russia invaded Ukraine and inflation is running rampant. Bitcoin however capitulated, there was also some thought that as the ruble collapsed that it could help stem the flow of the rout in cryptocurrencies but the flow seemed to favor the yellow metal.

The chart below shows the difference in performance between the two asset classes in 2022. Gold is just under flat at the moment but Bitcoin is currently running -59% down on the year. There are some correlations in the way the two assets move but when the going gets tough Bitcoin's losses are very volatile. As a store of value and safe haven, there is no question at the moment gold is the clear winner. If you are looking for the high beta play then Bitcoin could be your answer but for stability, there is no contest. 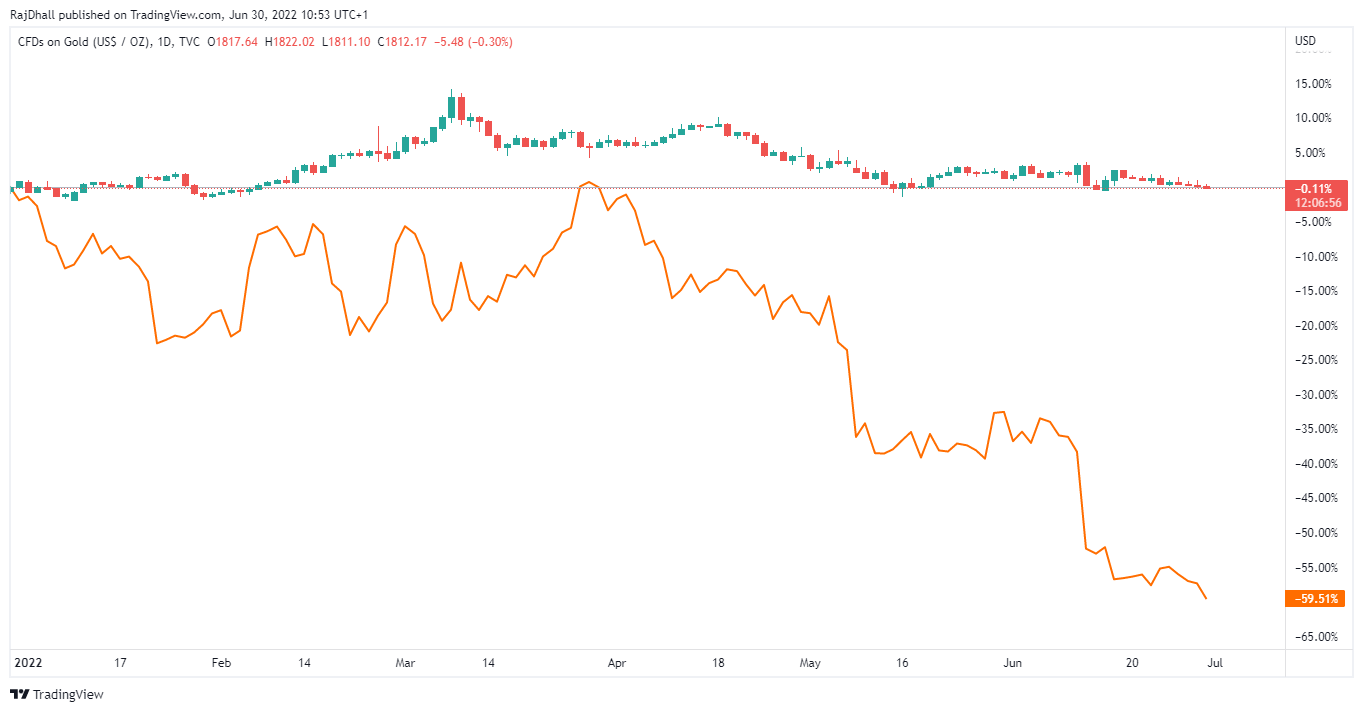