(Kitco News) - Global uranium production increased slightly in 2021 to 48,303 tonnes. Kazakhstan was the largest uranium producing country in 2021, followed by Namibia and Canada.

WNA said that last year, mined uranium covered only 77% of the global demand, with the rest covered by secondary sources.

According to the report, in situ leach (ISL, also called in situ recovery, ISR) mining technology has been steadily increasing its share among other uranium mining methods, mainly due to its widespread use in Kazakhstan, and in 2021 it accounted for 66% of global production.

Kazakhstan was the largest uranium producing country with 21,819 tU mined in 2021, which is 12% more compared to the country’s output of 19,477 tU in 2020, as the pandemic-related safety measures that were implemented in 2020 impacted production volumes throughout the second half of that year.

Namibia jumped one position up and landed second in 2021. The country produced 5,753 tonnes of uranium in 2021, which is 6% higher than in 2020 (5,413 tonnes). Chinese companies have taken control over two uranium producing mines in Namibia, Husab and Rössing.

Canada was the world's largest uranium producer for many years, accounting for about 22% of world output, but in 2009 was overtaken by Kazakhstan. In 2021, Canada was third and produced 4,693 tonnes of uranium, which is 21% more than in 2020 (3,885 tonnes). Uranium production increase in Canada was due to the resumption of production at the Cigar Lake mine in Saskatchewan after the COVID-19 related suspension was lifted in July 2021.

Australia fell from second to fourth place with 4,192 tonnes of uranium produced in 2021, which is 32% less than in 2020 (6,203 tonnes). Uranium production ceased at Rio Tinto’s Ranger mine in January 2021 and, therefore, the number of active uranium mines in Australia fell from three to two. However, Australia's known uranium resources are the world's largest – almost one-third of the world total.

Uzbekistan sits fifth. This resource-rich Central Asian nation produced 3,500 tonnes of uranium in 2021, unchanged from 2020. Uzbekistan does not process uranium locally and exports its entire produced stock to other countries. 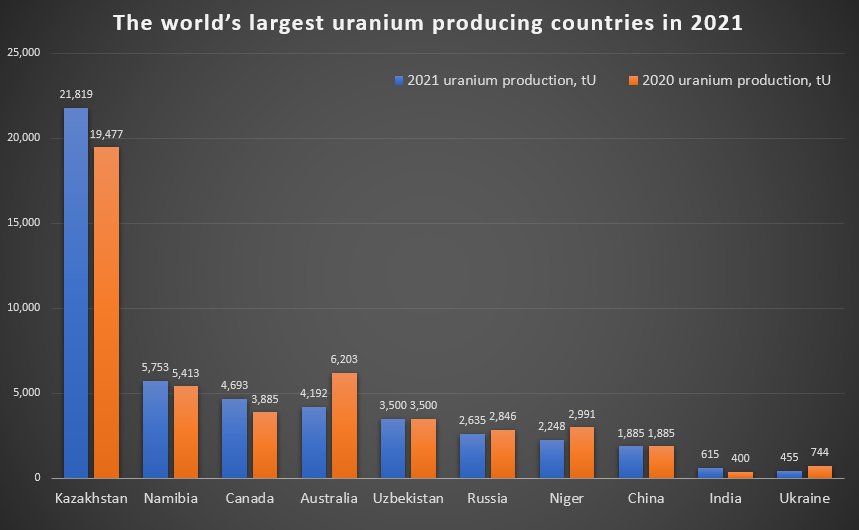