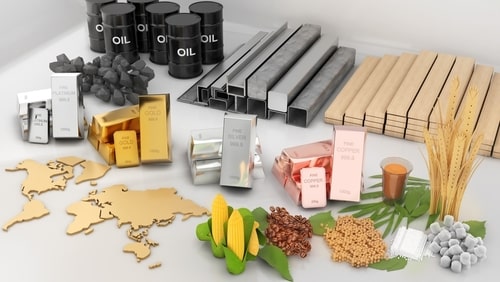 (Kitco News) Despite gold kicking off the second half of the year with a drop below $1,800 an ounce, Bloomberg Intelligence sees the precious metal moving higher versus broader commodities, which are at risk of a reversal.

Crude oil is the commodity facing the biggest reversion risk in the second half of 2022, while gold is among the few that could benefit and see the $2,000 an ounce levels again, according to Bloomberg Intelligence senior commodity strategist Mike McGlone.

"The great reversion of 2022 may gain momentum in 2H, and crude oil seems a top candidate to drop. We see 2H risks tilted toward accelerating retracement in the Bloomberg Commodity Index, with gold potentially a primary standout," McGlone said in his mid-year outlook.

Bloomberg Intelligence looked at whether gold got too cold while commodities got too hot during the year's first half. And after looking at all the data, McGlone noted gold is trend ready while the rest of the commodity market will be coming down from its peaks.

"Gold's moribund performance is clearly different from past high-velocity commodity rallies. But the metal looks poised to come out ahead … Juxtaposed on the chart is gold hovering around its 100-week mean for almost a year. Our take: Gold is trend ready, while broad commodities risk reversion to their historic mean," McGlone wrote. "The last similar period of sluggish gold vs. strong commodities was in 2000 as the internet bubble burst and the precious metal jumped into an extended bull market."

Gold is likely to shine versus industrial metals for the rest of 2022 as global growth declines.

"We see copper risks aligned with tumbling stock markets and the metal's roughly 15% drop in 1H continuing in 2H," McGlone said. "Cooper trading above $10,000 a ton could signal recovery, but we think it's more likely that gold will breach $2,000 an ounce."

From the macro perspective, Bloomberg Intelligence sees inflation slowing down later this year as the stock market continues to decline and commodities, including oil and industrial metals, fall.

"If 2022 isn't much different from past high-velocity pumps in the Bloomberg Commodity Spot Index (BCOM), commodities may drop about 50% in 2H. What seems extreme is quite normal … More recent examples of similar surges to peaks in 2008 and 2011 were consistent, as commodities didn't stabilize until dropping about 50%," McGlone noted. "Rising Federal Reserve tightening expectations despite meltdowns in the stock market and copper (considered an inflation/economic indicator) suggest greater risks of broad commodity-price reversion."

Bloomberg Intelligence is projecting a transition to deflation in the commodity space by the end of 2022.

"Reversion is typical in commodities after they stretch too high, and it may be getting signals from slumping industrial metals, cotton, wheat and lumber at the end of June. We believe central banks' vigilance fighting inflation amid plunging equity prices, global GDP and consumer sentiment will succeed, and see some parallels to 2008 and 1929. Both years were notable for stock-market drawdowns, with an exception of the excess liquidity that fueled asset-price pumps in 2020-21 and during the Russia-Ukraine war," McGlone wrote.

The base case for the second half of 2022 is for commodities and equities to fall deep enough for the Federal Reserve to start minimizing its rate hikes. And for gold and U.S. Treasury long bonds to start outperforming. Bitcoin might also start to mirror gold more, according to the outlook.