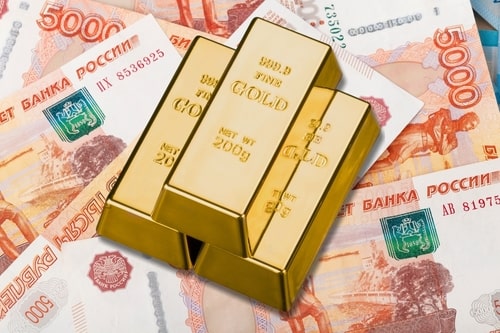 (Kitco News) Switzerland imported only 284 kg of Russian gold worth about $16 million in June, which is significantly lower than the 3 tonnes worth about $200 million reported in May, according to customer data released Tuesday.

Last month, it was revealed that Switzerland imported gold from Russia for the first time since Moscow invaded Ukraine at the end of February.

The global community criticized the Swiss May gold imports as helping Russia finance its war in Ukraine, which the country's government denied. The Swiss officials responded that the imported gold originated in Russia but was shipped from Britain, adding that customs is investigating whether any sanctions were violated.

It is still unclear who is the owner of the imported gold and how long the bullion was sitting in Britain before being imported into Switzerland in May.

Switzerland plays a major role in the gold industry as it is the world's largest refining center for the precious metal. And Russia is the world's second-biggest gold producer. For about a year before February, Switzerland, on average, imported about 2 tonnes of gold a month from Russia.

At the end of June, the U.S., Britain, Japan, and Canada agreed to ban all new Russian gold imports. The European Commission proposed a similar ban last week.

This comes after the London Bullion Market Association implemented a trading ban in London on all Russian-produced gold made after March 7. However, Russian gold produced before that date can still be traded.

Many analysts see the ban on Russian gold as a largely symbolic move.

"Russian gold could and would still find a home in other regions, ultimately perhaps coming back to international markets," said Nicky Shiels, metals strategist at MKS PAMP. "China and India … will happily purchase at a discount. And the CB of Russia has for many years purchased most of local production/gold supply and can continue to do again or act as the buyer of last resort."

Gold exports matter for Russia, but it will also be quite "content" with just buying up its locally-produced gold and adding it to the central bank's gold reserves, Michael Wilkerson, founder of stormwall.com, told Kitco News.

"When you look at gold specifically, Russia is the world's second-largest producer. Exports are about a $15-$17 billion annual revenue item for Russia. A lot of that goes to the G-7, Britain in particular," Wilkerson said. "[But] I don't think it's as consequential as oil and gas sanctions. I imagined that Russia would find another home for it."

Since about 2018, Russia has been substantially increasing its gold reserves," he added.

"Russia has officially said they're going to source much of that increase from domestic production. So at least over the short term, Russia will be quite content to stash that gold away in its central bank. They announced a month ago that they intend to work on a plan to back the ruble by gold and other commodities," Wilkerson said.