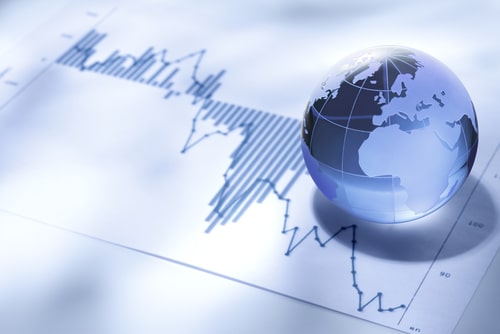 (Kitco News) The International Monetary Fund has a severe recession warning as it forecasts slower growth for this year and next, according to its latest World Economic Outlook.

Global growth is now projected to slow to 3.2% in 2021, which is 0.4 percentage points lower than in April, the IMF said Tuesday.

"Global output contracted in the second quarter of this year, owing to downturns in China and Russia, while U.S. consumer spending undershot expectations. Several shocks have hit a world economy already weakened by the pandemic: higher-than-expected inflation worldwide––especially in the United States and major European economies––triggering tighter financial conditions; a worse-than-anticipated slowdown in China, reflecting COVID19 outbreaks and lockdowns; and further negative spillovers from the war in Ukraine," the World Economic Outlook stated.

The number one priority is to tame inflation. But that could lead to real economic costs, including a global recession.

"The risks to the outlook are overwhelmingly tilted to the downside. The war in Ukraine could lead to a sudden stop of European gas imports from Russia; inflation could be harder to bring down than anticipated either if labor markets are tighter than expected or inflation expectations unanchor; tighter global financial conditions could induce debt distress in emerging market and developing economies," the report added. "A plausible alternative scenario in which risks materialize, inflation rises further, and global growth declines to about 2.6 percent and 2.0 percent in 2022 and 2023, respectively, would put growth in the bottom 10 percent of outcomes since 1970."

According to the outlook, inflation is expected to have the most significant impact on the world economy in 2023.

"Global inflation … is anticipated to reach 6.6 percent in advanced economies and 9.5 percent in emerging market and developing economies this year—upward revisions of 0.9 and 0.8 percentage points, respectively. In 2023, disinflationary monetary policy is expected to bite, with global output growing by just 2.9 percent," the IMF noted.

"The outlook has darkened significantly since April. The world may soon be teetering on the edge of a global recession, only two years after the last one," IMF's chief economist Pierre-Olivier Gourinchas said in a blog post that was published at the same time as the outlook.

The apprehension is that risks listed by the IMF in April are materializing. These include a sudden stop of European gas flows from Russia, stubbornly high inflation de-anchoring future price expectations, a surge in debt stress due to tighter monetary policies, renewed COVID outbreaks, rising threats from food insecurity, and geopolitical fragmentation.

Looking at the outlook country-by-country, the IMF's downgrade to the U.S. expansion was one of the biggest. The U.S. is now expected to grow 2.3%, which is 1.4 percentage points lower than the April forecast.

The risk of a recession would be at the highest levels in 2023, the IMF noted, citing growth bottoming out and household savings declining.

"For example, according to the latest forecasts, the United States will have real GDP growth of only 0.6 percent in the fourth quarter of 2023 on a year-over-year basis, which will make it increasingly challenging to avoid a recession," the IMF said.