Geopolitical uncertainty has quietly supported gold prices, but now the volume has been turned up

(Kitco News) - The gold market is retesting significant resistance at $1,800 an ounce as renewed geopolitical uncertainty has increased safe-haven demand for the precious metal.

Analysts note that geopolitical risks have picked up after U.S. Speaker of the House of Representatives Nancy Pelosi visited Taiwan, raising the ire of China. In response to Pelosi's visit, as part of a tour of Asia, China has kicked off the biggest-ever military exercises in the Taiwan Strait. The military exercises include live-fire drills just 12 miles from the island. 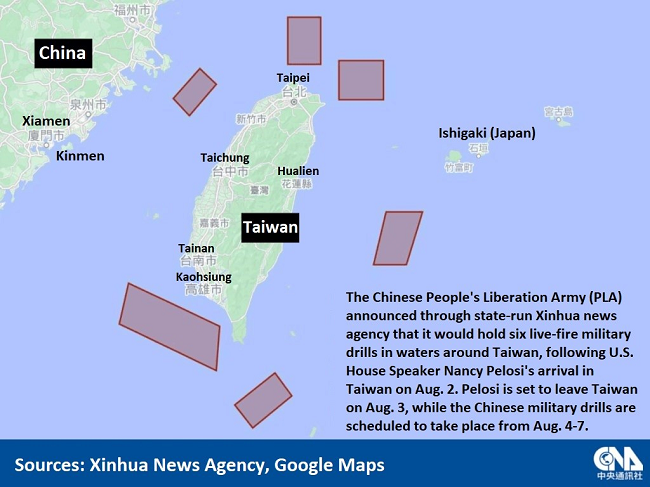 The drills, which have surrounded Taiwan include ballistic missile launches. China had warned the U.S. that relations between the two countries would be strained if Pelosi visited Taiwan. China does not recognize the island nation's independence.

"The U.S. side will bear the responsibility and pay the price for undermining China's sovereign security interests," foreign ministry spokeswoman Hua Chunying said at a regular press briefing in Beijing.

With rising risks, gold prices have pushed to $1,803 an ounce and are up 1.5% on the day. Although gold prices are up, the new tensions have not impacted equity markets with the S&P 500 opening relatively flat on the day.

Rising tensions with China are just the latest round of growing geopolitical anxiety. While gold prices have pushed higher, many investors wonder why gold has been in a downtrend for the last two months despite a world filled with risk and uncertainty.

In March, gold prices pushed briefly above $2,000 an ounce as Russia's invasion of Ukraine prompted investors to seek safe-haven assets. Although the attack continues, interest in gold as a safe haven has appeared to have waned in recent months as the threat of a larger-scale war has diminished.

However, while it might not be apparent, some analysts have said there is still a solid safe-haven bid in the gold market.

How significant is the geopolitical risk premium in gold and silver

Chantelle Schieven, head of research at Murenbeeld & Co., has been tracking gold's risk premium since the late-1970s. She has researched how gold and silver prices have reacted to events like the Falkland Island War, the first Gulf War, the 9/11 terrorist attacks, Russia's annexation of the Crimea region in eastern Ukraine and the North Korea nuclear missile threat.

In an interview with Kitco News, Schieven said that their research shows that geopolitical uncertainty can raise gold prices by 13% on average. For silver, there is, on average, a 10% geopolitical risk premium in times of uncertainty.

She added that the problem with geopolitical safe-haven demand is not sustainable. Once the threat has diminished, gold and silver can quickly give up their gains.

However, she added that this period of geopolitical uncertainty has been different as it has been more sustainable. She explained that Russia's invasion of Ukraine had exacerbated rising inflation, pushing the global economy into a recession as food and energy prices rose at an extraordinary pace.

At the same time, Russia, in retaliation to western sanctions, has weaponized its oil and gas production, limiting how much supply it sends to Europe. As energy prices rise, the threat of an energy crisis grows in Europe.

Added to the uncertainty and war in Europe, there is a looming threat of a war in Asia.

"There are a lot of risks in the world today and they are all very real and at the forefront," she said.

"Looking at where the U.S. dollar and interest rates are, gold prices should be a lot lower," she said. "It may not look like it, but risk premium has played an important role in supporting gold prices this year."

Schriever said that she expects gold prices to continue to push higher, driven by safe-haven demand.

"We are not convinced that March was the only spike in gold's geopolitical risk premium," she said.

Robert Minter, director of ETF Investment Strategy at abrdn, said that he also thinks safe-haven demand has played an important role in the gold market.

In a comment to Kitco News, he said that since the Federal Reserve started aggressively raising interest rates, real yields have risen into positive territory to a high of 27 basis points.

"Gold should be only $1,300 an ounce. The $400 price premium tells you something else other than real yields is affecting gold. To us, it is geopolitical risk, deglobalization, the technical stagflation environment," he said.

Minter added that he does not expect geopolitical tensions to ease anytime soon and will continue to support gold prices throughout the year.

"Geopolitical tensions, like inflation, seem to have achieved a new higher cruising altitude even if both moderate in the medium term. Very clearly, Putin and Xi have decided to challenge the world order. That has implications for global supply chains and inflation," he said.

In a recent interview with Kitco News, George Milling-Stanley said he could see gold prices push back above $1,800 and be on their way to $2,000 as geopolitical uncertainty adds to the growing economic risks in the marketplace.