Aug 9 (Reuters) - The tech-heavy Nasdaq fell on Tuesday after a dismal forecast from Micron Technology dragged chip and technology stocks lower, while markets remained on the edge ahead of inflation data that will feed into the U.S. Federal Reserve's rate-hike plans.

A high inflation print on Wednesday, following last week's strong jobs numbers, will likely push the Fed to continue with aggressive rate hikes and weigh on a recent recovery in stocks.

Traders see a 70% chance of the Fed raising interest rates by 75 basis points in September, its third such big hike. IRPR

Adding to concerns around a tight labor market and inflation, data showed U.S. worker productivity fell sharply in the second quarter and on an annual basis posted a record decline. read more

Five of the 11 major S&P 500 sectors fell, with consumer discretionary (.SPLRCD), information technology (.SPLRCT) and communication services (.SPLRCL) stocks down between 0.7% and 1.5%.

Heavyweight peers Nvidia (NVDA.O) and Advanced Micro Devices (AMD.O) tumbled about 4% each, extending sharp losses from the previous session after a revenue warning from Nvidia.

"It does add to a general growing realization that the move the market experienced in July was probably more of a counter-trend rally in a deteriorating economic situation for both companies (Micron and Nvidia)," said Robert Stimpson, chief investment officer at Oak Associates Funds.

The broader Philadelphia Semiconductor Index (.SOX) has declined about 7% in the last three sessions. 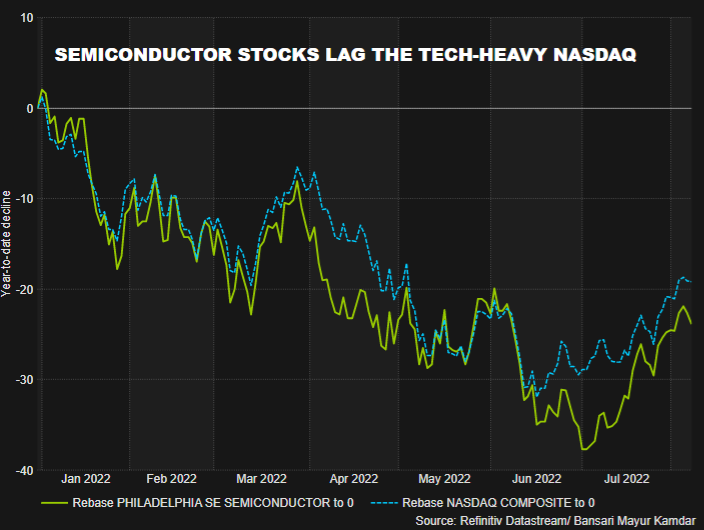 "It's utterly discounted," said Michael Shaoul, chief executive officer at Marketfield, on why chip stocks were unfazed by the bill.

Shaoul said trading volumes remained low due to summer and "it really doesn't take a lot of capital to push over yields or the S&P".

Rate-sensitive growth and technology stocks slipped as U.S. Treasury yields climbed, with megacaps such as Alphabet Inc (GOOGL.O) and Tesla Inc (TSLA.O) down more than 1% each.

Despite a choppy recovery since mid-June, the benchmark index (.SPX) is down 13.5% this year after hitting a record high in early January as surging prices, hawkish central banks and geopolitical tensions weigh.

Stronger-than-expected earnings from corporate America have been a positive, with 77.5% of S&P 500 companies beating earnings estimates, according to Refinitiv data as of Friday.

U.S. vaccine maker Novavax (NVAX.O) slumped 28.9% after it halved its annual revenue forecast as it does not expect further sales of its COVID-19 shot this year in the United States amid a global supply glut and soft demand. read more

Reporting by Bansari Mayur Kamdar and Aniruddha Ghosh in Bengaluru; Editing by Saumyadeb Chakrabarty, Arun Koyyur and Shounak Dasgupta
Disclaimer: The views expressed in this article are those of the author and may not reflect those of Kitco Metals Inc. The author has made every effort to ensure accuracy of information provided; however, neither Kitco Metals Inc. nor the author can guarantee such accuracy. This article is strictly for informational purposes only. It is not a solicitation to make any exchange in commodities, securities or other financial instruments. Kitco Metals Inc. and the author of this article do not accept culpability for losses and/ or damages arising from the use of this publication.
new