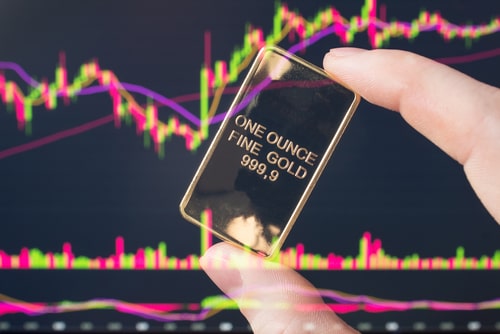 (Kitco News) Gold rallied after inflation in the U.S. cooled slightly in July, coming in at 8.5%, which is still close to its highest annual rate in four decades.

The U.S. Consumer Price Index (CPI) came in at 8.5% in July and was lower than the market expectation of 8.7%. The most recent data follows June's 9.1% annual gain.

On a monthly basis, the headline number was unchanged from last month following an advance of 1.3% in June, the U.S. Labor Department said on Wednesday. The flat number was mainly due to a 7.7% drop in gasoline prices, which offset increases in other sectors.

Core inflation, which strips out volatile food and energy costs, accelerated 5.9% from a year ago, surprising slightly on the downside but maintaining the same pace as in June. Meanwhile, the monthly increase was also below markets' expectations, with an advance of 0.3%.

The biggest price drop was in the energy sector, down 4.6% on a monthly basis. “The gasoline index fell 7.7 percent in July and offset increases in the food and shelter indexes, resulting in the all items index being unchanged over the month. The energy index fell 4.6 percent over the month as the indexes for gasoline and natural gas declined, but the index for electricity increased. The food index continued to rise, increasing 1.1 percent over the month as the food at home index rose 1.3 percent,” the release stated.

The July CPI data was the most anticipated release of the week as markets attempted to gauge how aggressive the Federal Reserve could be at the September meeting.

According to some analysts, the price deceleration in July is not meaningful enough for the Fed to start slowing down its tightening cycle just yet.

“With headline inflation still at 8.5% and core inflation at 5.9%, this is not yet the meaningful decline in inflation the Fed is looking for. But its a start and we expect to see broader signs of easing price pressures over the next few months,” said Capital Economics chief U.S. economist Paul Ashworth.

For gold, the slowdown in inflation could trigger substantial buying, but there is still a risk of a price reversal, said analysts at TD Securities.

“Ultimately, prop traders are still holding a massive amount of complacent length, suggesting we have yet to see capitulation in gold, which argues that the pain trade remains to the downside, but prices may be able to trade higher before macro headwinds weigh on the yellow metal once more,” the analysts said Wednesday.