Copper speculators anticipate downturn for market and the world

LONDON, Aug 11 (Reuters) - Speculators in the copper market, viewed as an indicator of the health of the economy, are betting a global downturn means the metal used in power and construction has further to fall, despite its recent rebound.

The latest data shows more funds with bearish positions than bullish copper positions on the London Metal Exchange and COMEX.

But it has fallen 25% since touching a record $10,845 a tonne in March because of a growth slowdown in top consumer China and aggressive interest rate hikes that threaten a global recession.

"Funds have been building up short positions in anticipation of recession," said Ole Hansen, head of commodity strategy at Saxo Bank in Copenhagen.

Data from broker Marex shows the net speculative short position in LME copper is lower, but still stands at 24% of open interest or 1.4 million tonnes as of Aug. 4. 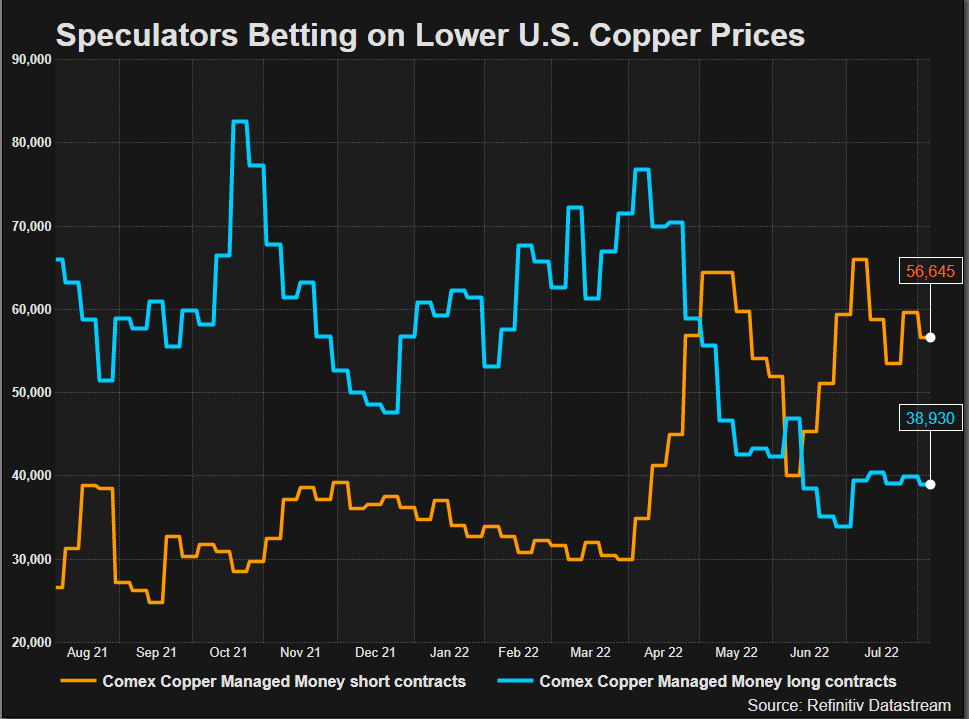 Some investors have been buying put options, giving the holder the right to sell copper at a specific price at a fixed date in the future.

An options trader, who asked not to be named, said many speculators had been using LME options to target the downside. Some of those levels correspond to marginal production costs that investors often use to gauge how far metals prices could fall in a bearish scenario.

The direct costs of smelting copper at the 10% of highest cost producers are $5,085 a tonne, rising to $6,000-$6,400 per tonne when sustaining capital expenditure - needed to maintain current output - is included, Morgan Stanley said in note. 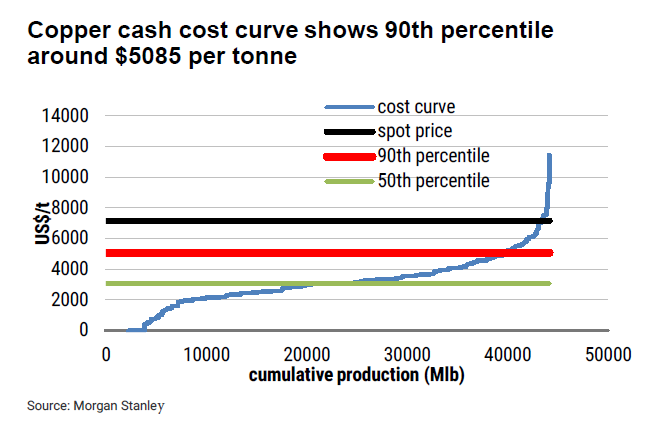 Some spectulators are expecting copper prices to fall to the marginal costs of production at around $5,000 a tonne

If the price remained below marginal cost for a prolonged period, losses could force some producers to shut down.

"Sometimes the spot price will just plunge right through that (marginal) level," Tom Price, head of commodities strategy at Liberum, said, adding that the disconnect between costs and prices could last for weeks or months.

Price estimates marginal costs for copper at around $6,100 a tonne.

Reporting by Eric Onstad; editing by Pratima Desai and Barbara Lewis
Disclaimer: The views expressed in this article are those of the author and may not reflect those of Kitco Metals Inc. The author has made every effort to ensure accuracy of information provided; however, neither Kitco Metals Inc. nor the author can guarantee such accuracy. This article is strictly for informational purposes only. It is not a solicitation to make any exchange in commodities, securities or other financial instruments. Kitco Metals Inc. and the author of this article do not accept culpability for losses and/ or damages arising from the use of this publication.
new