NEW YORK, Aug 11 (Reuters) - The S&P 500 and Nasdaq turned negative while Treasury yields rose as investors digested signs of cooling U.S. inflation and bets the Federal Reserve could slow its rate hikes against warnings that the battle with rising prices was far from over.

Thursday's data showed U.S. producer prices unexpectedly fell in July amid a drop in the cost of energy products. This followed Wednesday's surprise news that consumer prices were unchanged in July due to a drop in gasoline prices. read more

Two straight days of slower inflation data had given investors hope that soaring prices were finally "peaking and heading in the right direction," said Joe Saluzzi, co-manager of trading at Themis Trading in Chatham, New Jersey.

But he cautioned that this was a "one month data point."

"You'd still like to see a trend next month and see it's not necessarily just energy. You want to see other prices coming down. It's still early in the game," Saluzzi said.

After adding more than 2% on Wednesday and rising more than 1% to a 3-month high earlier on Thursday, the S&P turned red in afternoon trading and Nasdaq turned negative.

"In some regards we've already priced in the hope that inflation isn't going to be as bad as previously expected and the expectation the Fed is not going to be as aggressive," said Robert Phipps, a director at Per Stirling Capital Management in Austin, Texas.

He expects that the Fed to be cautious about slowing its tightening until inflation shows more improvement.

"The Fed's learned their lesson. They're not going to take their foot off the brakes until it's obvious to everybody that inflation is returning to their 2% target," he said. 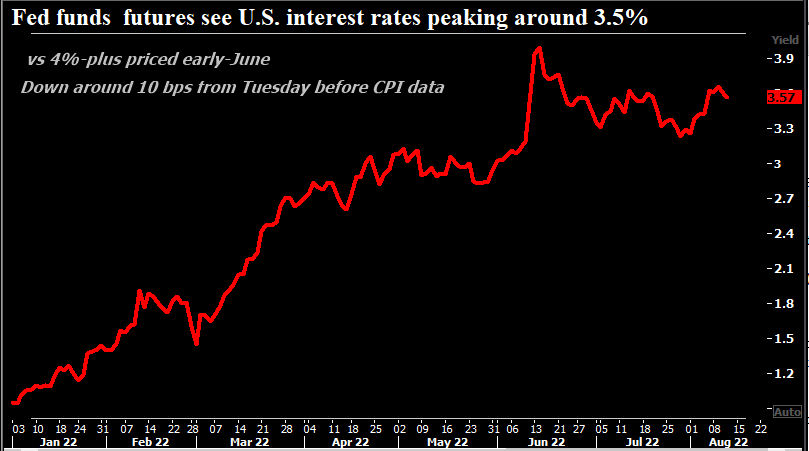 San Francisco Fed President Mary Daly, in an interview with the Financial Times, earlier warned it was far too early for the U.S. central bank to declare victory in its fight against inflation and said a half-percentage point rate rise in September was her baseline. read more

In currencies, the dollar extended losses against other majors after the inflation data prompted traders to dial back rate hike expectations. read more

In Treasuries, 10-year note yields hit a more than two-week high as investors in that market bet that the Fed would press on with rate hikes since inflation, while showing signs of abating, remained high.

In commodities, oil settled higher after the International Energy Agency raised its oil demand growth forecast for 2022 as soaring natural gas prices lead some consumers to switch to oil.

Additional reporting by Huw Jones, Sujata Rao, Stella Qiu and Alun John; Editing by Elaine Hardcastle, David Holmes and John Stonestreet
Disclaimer: The views expressed in this article are those of the author and may not reflect those of Kitco Metals Inc. The author has made every effort to ensure accuracy of information provided; however, neither Kitco Metals Inc. nor the author can guarantee such accuracy. This article is strictly for informational purposes only. It is not a solicitation to make any exchange in commodities, securities or other financial instruments. Kitco Metals Inc. and the author of this article do not accept culpability for losses and/ or damages arising from the use of this publication.
new