Over the past year the number of registered storage units has slumped from 604 to 472, the lowest in at least a decade, with the collective retreat reflecting the diminishing pool of metal to be stored.

Total LME stocks, including so-called shadow inventory stored off-market, stood at 1.031 million tonnes at the end of June. That was down 700,000 tonnes from the start of January and 2.24 million tonnes less than in June 2021.

Scarcity in the physical supply chain has drained metal away from the exchange, hitting rental revenue for storage suppliers.

Glencore's (GLEN.L) sale of its Access World warehousing arm this year marked the last departure of the trade houses and banks that moved into the LME storage business in the early 2010s.

The buyer, Malaysia's Infinity Logistics and Transport (1442.HK), typifies the shift in ownership as LME warehousing returns to those in the business of warehousing rather than trading. 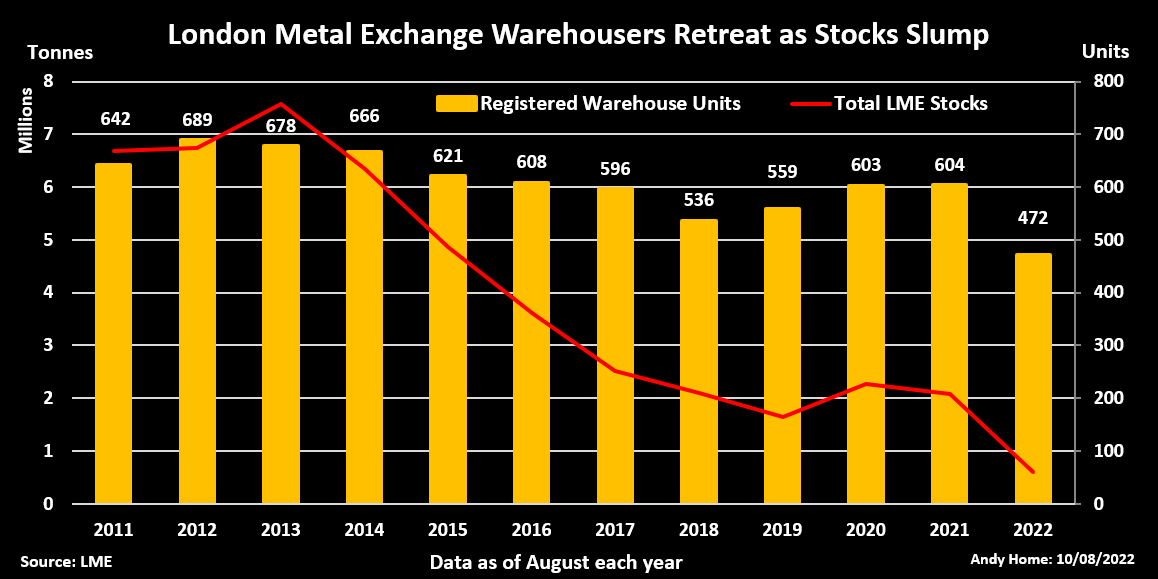 Goldman Sachs (GS.N) led the charge into LME warehousing with its purchase of Metro International in 2010. The bank was betting that the global financial crisis would generate a tsunami of unsold aluminium.

It did. LME-registered aluminium inventory mushroomed from 1.17 million tonnes in August 2008, just before the credit storm broke, to 4.6 million tonnes a year later.

What the physical supply chain didn't want was a bonanza for the financial sector as the surplus of metal created a super-contango that turned the prosaic business of financing stock into a major money earner.

With the profitability of the trade hinging on the cost of storage, financiers had every incentive to move aluminium to cheaper off-market rental deals.

This led to the infamous queues, first at Detroit and then at the Dutch port of Vlissingen, as the LME's restrictive load-out rates - designed for low-tonnage industrial users not high-volume financial players - caused massive logjams of departing aluminium.

Operators could use the income from queue-trapped metal to attract fresh inflows, creating a merry-go-round effect and lifting physical premiums ever higher.

The scandal drew the ire of some of the world's biggest aluminium users, caused a stand-off with U.S. regulators and forced the LME to embark on a lengthy campaign to constrain the queue model.

The aluminium carousel continues to revolve in muted form at Malaysia's Port Klang, where ISTIM has had a load-out queue at the end of every month since February 2021. The wait for aluminium was 109 days at the end of June.

WINDING DOWN IN PORT KLANG

Port Klang still holds the largest amount of aluminium in the LME warehouse network. Stocks, both registered and shadow, totalled 397,000 tonnes at the end of June, equivalent to 60% of total exchange-linked aluminium inventory.

But that's a long way off the 1.7 million tonnes sitting the city's warehouses as recently as February last year.

The aluminium carousel is also slowing for want of fresh supply. Port Klang had 82,175 tonnes placed on warrant in the first quarter of the year. Inflow dwindled to 14,825 tonnes in the second quarter and has totalled 10,450 tonnes since the start of July.

The amount of live tonnage that could keep the roundabout spinning at the port has fallen to 80,175 tonnes from 430,000 at the start of the year.

It should come as no surprise then that warehousing capacity in Port Klang has been cut sharply by just about every operator, with the number of registered LME sheds tumbling to 51 from 130 a year ago, by far the largest change by location. Among the big operators at the port, Access World has cut 32 units, ISTIM 18 and P.Global Services 16.

Total LME-listed storage capacity at Port Klang shrank to 472,000 square metres at the end of June from 770,000 a year earlier, accounting for almost half the 660,000 square metres of shrinkage across the system as a whole.

Dutch neighbour Vlissingen lost another 49,000 with registered capacity now at 67,500 square metres. At the height of the queue mania in 2016 it boasted 560,000 square metres of LME storage capacity.

Only one LME good-delivery location - Owensboro in the United States - registered capacity growth in the past year and that was by only 4,000 square metres thanks to a new listing by Grafton Warehouse Services.

Grafton was the only company among 27 registered LME warehouse operators to increase the number of units over the past 12 months.

When Goldman demonstrated the money-making potential of aluminium surplus at Detroit, others were quick to join the party.

Glencore (GLEN.L), J.P.Morgan (JPM.N), Trafigura, Noble Group (NOBG.SI), Mercuria (7190.T) and Brazil's BTG Pactual (BPAC3.SA) were all involved in the LME storage business at some stage in the 2010s.

At the peak of this investment wave in July 2014 warehouse units directly controlled by or related to metals trading entities accounted for 62% of the LME network. The ratio has since fallen to 6%.

Goldman, the first to arrive, was the first to leave in 2014 after finding itself caught in the eye of the media storm that broke over the Detroit load-out queues.

Some tried to recreate the queue model but failed and left LME warehousing. One went disastrously wrong, with the LME delisting Worldwide Warehouse Solutions, then owned by Singapore's Golden Dragon Resources, owing to a financial meltdown in 2018.

The boom that attracted Wall Street heavyweights and commodity traders alike was predicated on surplus metal that needed storing and financing in a logistical system that wasn't designed to cope with operators playing for such high-tonnage financial stakes.

Warehousing became the tail that wagged the global aluminium market, hard-wired into the shifting flows of metal between registered and shadow storage and for a time into physical premiums.

That time of plenty has turned into a time of scarcity and LME warehousing is returning to the purely logistical facilitator it used to be before Goldman saw gold in the aluminium mountains.

The opinions expressed here are those of the author, a columnist for Reuters.