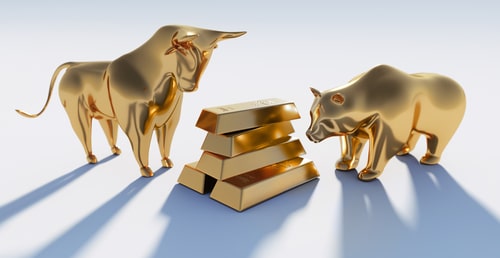 (Kitco News) It is a misconception that gold does not offer a yield, at least when it comes to central banks, according to TD Securities, which sees gold deposits starting to pay robust yields.

"While yield generation from gold holdings is generally not available to most private investors, central banks can actively manage their holdings to generate returns," TD Securities head of commodity strategy Bart Melek said.

Central banks can either lend out their bullion reserves to earn the gold deposit rate or swap the precious metal for U.S. dollars at the gold offered forward rate (GOFO) or the swap rate, Melek summarized in the report.

Keep in mind that gold reserves are considered to be highly liquid holdings.

Over the past three decades, the gold lease rates fluctuated between three distinct periods.

Post-COVID, a big shift has occurred as global monetary policies tightened, with the rate averaging around 50 basis points since mid-March 2022, he added.

"With the Fed continuing to tighten aggressively in the face of sky-high inflation, real rates will continue to rise across much of the Treasury curve, speculative long activity will wane, and central banks will be less aggressive in growing gold reserves. Consequently, TD Securities expects that the environment will again be ripe for a sustained period of relatively high yields paid for gold on deposit with bullion banks."

Why do central banks hold gold, and why are gold yields starting to look promising?

Central banks hold gold in their reserves mainly because of its intrinsic value, its liquidity, and the fact that it is no one's liability.

However, TD Securities noted that there had been pressure on central banks to leverage their gold reserves to generate returns beyond capital gains.

"This result[s] in higher lease rates, as the central bank metal flood[s] spot markets which was then returned in the future by producers and other holders of physical. This is a trend which has started to return recently," Melek wrote. "According to The World Gold Council's 2020 Central Bank Gold Reserves Survey, 47% of those surveyed said that they are actively lending out their holdings, while 53% said that they are involved in swap transactions with their gold reserves."

"The reversal of extremely dovish monetary conditions, as the Fed and other monetary authorities engaged in aggressive tightening, suggest the environment is ripe for higher lease rates," he said. "In addition to monetary policy, central bank selling and purchases also help to drive gold lease rates on gold, as does hedging activity."

Also, higher real and nominal rates are usually good news for gold yields. "There will be continued gold selling pressure or a general lack of significant interest well into 2023, as aggressive Fed Funds increases lift real rates along the curve and the opportunity cost of holding the yellow metal in vaults rises in the face of unacceptably high inflation, we also conclude that lease rates should be at consistent highs not seen for well over a decade," Melek explained.

"A bear market in gold tends to prompt miners to take out hedges with bullion banks, creating an environment where gold lease rates are likely to be elevated and volatile. Economic and commodity market weakness also means that many central banks will need to utilize USD reserves more than in boom times, which suggests that gold purchases may remain slow. This too should help to lift gold yields into 2023," Melek added.