Gold price would be $150 higher if not for the U.S. dollar – Wells Fargo 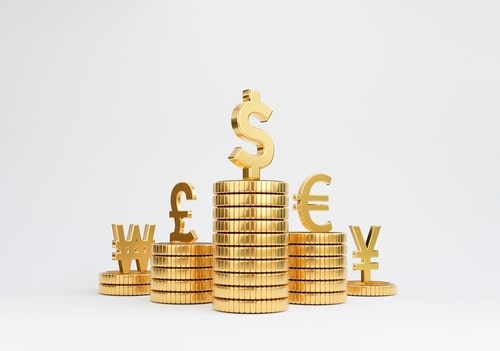 (Kitco News) The U.S. dollar has been the main culprit holding gold back this summer, but Wells Fargo still projects the precious metal to end the year above $2,000 an ounce.

Despite this week's gains, gold is still trading below $1,800 an ounce as markets await Federal Reserve Chair Jerome Powell's keynote speech at the Jackson Hole symposium on Friday. At the time of writing, spot gold was trading just above the $1,752 an ounce level, up 0.22% on the day.

If not for the U.S. dollar index at 20-year highs, gold would be around $150 higher than its current trading levels, Wells Fargo's real asset strategy head John LaForge told Kitco News.

Wells Fargo's year-end target remains $2,000- $2,100 an ounce, but if the U.S. dollar keeps surprising on the upside, that target could be unachievable.

Over the summer, the dollar has become the popular safe-haven play as other economies struggle with more problematic inflation and growth concerns. And the U.S. dollar could hold on to its strength for the next six months, according to LaForge.

"Our base case is that the U.S. will enter a recession somewhere in October or November, which will last until the middle of next year. Typically the dollar loses strength when signals say we are coming out of recession. So, if our base case is correct, you could see the dollar start acting weaker in Q1 of next year in anticipation of that," he described.

Until then, the dollar will keep acting as that defensive asset.

For gold, a recession doesn't necessarily mean a bad thing. But it all depends on the kind of recession the U.S. will see. A mild one could be beneficial for the gold price, LaForge noted.

On the inflation side, Wells Fargo does not see price pressures falling back to the Federal Reserve's 2% target. Longer-term inflation looks closer to 3%-4%.

Following Jackson Hole and the Fed's September meeting, the U.S. central bank will stick to much more measured rate hikes of around 50 basis points, following a set of 75-basis-point jumps. But its overall priority will remain with battling inflation, LaForge said.

"They are not going to change much. You might hear a word or two at Jackson Hole. But no doubt that the number one concern will be inflation. We only had one print that showed that maybe we peaked," he stated.

Another asset play on LaForge's radar is the crypto space after its fourth bear market. "I'd argue we reached the point with crypto where it has matured enough to prove there is value there," he said.

The last major speed bump for this market is regulation. And that could clear up within the next year, which will impact the price. "At this juncture, regulation is the number one thing. There are systems that the government wants to control. And money is a big one. There's a bit of a fight going on," LaForge said.

Regulation needs to be light enough to allow critical characteristics like independence and decentralization to remain at the core of crypto.

"What's looming in the next couple of years is the government coming in and regulating. The question is, how much? Do they take a light-glove approach as they did with the internet or a heavy-handed one? You have the example of the internet being regulated lightly. But that was with information and communications, which is important, but arguably not as important as money," LaForge highlighted. "If regulation is light-gloved, this is a whole new asset class. And we'll know that within the next year, and we'll start seeing it in the price."