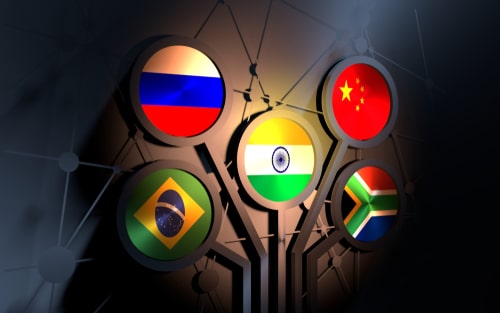 (Kitco News) With the global de-dollarization trend accelerating, the two assets that could stand to benefit are gold and the crypto space, according to analysts.

"The issue of creating an international reserve currency based on a basket of currencies of our countries is being worked out," Putin said at the BRICS business forum at the end of June. "We are ready to openly work with all fair partners."

The five countries are also trying to create an alternative mechanism for international payments, he added.

This is not the first time something like this has been mentioned, with the BRICS countries already starting to incorporate more local currencies for payments in mutual trades. Over the summer, India and Russia have been holding discussions to accept each other's local RuPay and Mir payment systems, according to the Deccan Herald.

"One can only think this is a move to address the perceived U.S.-hegemony of the IMF and will allow BRICS to build their own sphere of influence and unit of currency within that sphere," said ING global head of markets Chris Turner.

Russia's efforts to de-dollarize are far from new, but they have been accelerated following Western sanctions placed on Russia after its invasion of Ukraine at the end of February.

"The speed with which western nations and its allies sanctioned Russian FX reserves (freezing around half) no doubt shocked Russian authorities. The Central Bank of Russia effectively admitted as much and no doubt some BRICS nations – especially China – took notice of the speed and stealth at which the U.S. Treasury moved," Turner pointed out. "BRICS nations may therefore feel they need an alternative reserve currency to match something like the IMF's SDR."

IMF's SDR is not a currency in itself. Instead, it is a basket of claims on top reserve currencies such as the dollar, the euro, the pound, the yen, and the renminbi, Turner explained.

Safety, liquidity and return make a great reserve currency, which is why BRICS could potentially look toward gold, he added. "We doubt the mercantilist nations involved in BRICS would want to transfer valuable FX reserves into this more local sphere of influence. If they are worried about the path of sanctions and the increasing weaponization of the dollar, they, like Russia, might prefer to move into gold," Turner said.

"If it works and you look 20 years from now, you'd have Western dollar-euro influence. And on the other side, you'd have China's yuan-Russia's ruble, or whatever that combination would be. And then you'd have the third option called Bitcoin, which is the middle one that is not based on countries but based on individuals saying that they don't want to vote with a particular bloc, preferring a global currency that is not controlled by anybody," he told Kitco News. "These two blocs fighting could open up opportunities for something else [like Bitcoin] to pop up later on."

Impact on the dollar

In the meantime, the greenback has been surging, with the U.S. dollar index trading near 20-year highs ahead of the highly anticipated Jackson Hole symposium.

Over the summer, the dollar has become the popular safe-haven play as other economies struggle with more problematic inflation and growth concerns. And the U.S. dollar could hold on to its strength for the next six months, according to LaForge.

"Our base case is that the U.S. will enter a recession somewhere in October or November, which will last until the middle of next year. Typically the dollar loses strength when signals say the U.S. is coming out of recession. So, if our base case is correct, you could see the dollar start acting weaker in Q1 of next year in anticipation of that," he described.

Until then, the dollar will keep acting as that defensive asset.

Also, the BRICS' proposal to create their own reserve currency should have a limited impact on the U.S. dollar in the short term. However, if the de-dollarization trend continues to accelerate, it would leave a mark on the greenback, LaForge said.

"If you look at the dollar FX reserves being held by central banks globally, that is shrinking a bit. They are starting to pick up more of the alternative currencies. That's been going on for the last 15 years — the slow wind away from the dollar," he pointed out. "The impact longer term is not a major thing. But this combination of [big players like] China and Russia getting together to form their new currency block is real."