BRICS president: Russia and India have no need for the U.S. dollar 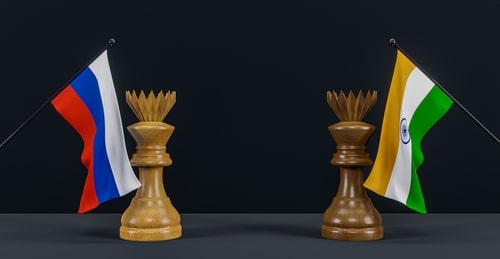 A new mechanism has been established between the two countries, using only rubles and rupees, Anand told reporters last week.

"We have implemented the mechanism of mutual settlements in rubles and rupees, and there is no need for our countries to use the dollar in mutual settlements," Russian state news agency RIA quoted Anand as saying.

Anand added that a similar mechanism is being developed between Russia and China to eliminate the use of the greenback and employ only rubles and yuan.

This way of paying for goods gives Russia a way to go around the sanctions imposed on the country following its invasion of Ukraine.

"The BRICS countries are opening up to Russia, offering the opportunity for the country to overcome the consequences of sanctions," Anand said.

Russia has also increased its ties with India, as trade jumped fivefold over the past four decades, according to Anand. India has been importing more oil from Russia, while Moscow has stepped up purchases of agricultural products, textiles, and medicine.

India has resisted the pressure from the West to ban Russian oil. "When Russia's military operation in Ukraine began, naturally there was pressure on India to stop importing Russian oil. But the Ministry of Foreign Affairs had to reject this pressure. The Russian side was assured that supplies would not be stopped and the sanctions regime would in no way affect the relationship between our countries," Anand stated.

"The issue of creating an international reserve currency based on a basket of currencies of our countries is being worked out," Putin said at the BRICS business forum at the end of June. "We are ready to openly work with all fair partners."

The five countries are also trying to create an alternative mechanism for international payments, he added.

Over the summer, India and Russia have held discussions to accept each other's local RuPay and Mir payment systems, according to the Deccan Herald.

"One can only think this is a move to address the perceived U.S.-hegemony of the IMF and will allow BRICS to build their own sphere of influence and unit of currency within that sphere," said ING global head of markets Chris Turner.

Russia's efforts to de-dollarize are far from new, but they accelerated following sanctions placed on Moscow after its invasion of Ukraine at the end of February.