The risk of gold price plunging below $1,700 is limited, says Standard Chartered 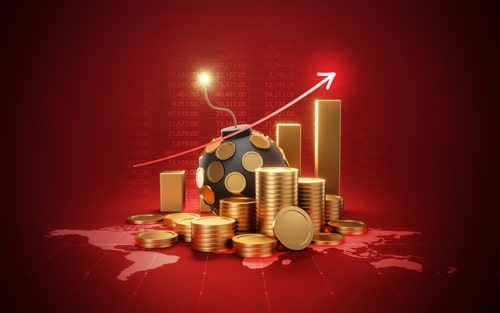 (Kitco News) Even though gold is lacking conviction at the moment as prices trend towards $1,700 an ounce, further downside remains limited, said Standard Chartered.

The U.S. dollar has been inflicting a lot of pain on gold prices over the summer months, forcing gold to wrap up August with the fifth monthly loss. And while the U.S. dollar index traded near 20-year highs on aggressive Federal Reserve rhetoric, December gold futures dropped to below $1,800 an ounce and were last trading at $1,722.50.

However, the good news for gold is that it is not likely to fall much further because most of the downside risk has already been priced in, said Suki Cooper, precious metals analyst at Standard Chartered.

"Although the yellow metal faces significant downside risks, it also benefits from tailwinds including recession risk, a price-responsive physical market, already scaled-back positioning and elevated inflation," Cooper wrote in a report this week. "The prospect of further rate hikes has quelled investor appetite. While we expect gold to trend lower towards USD 1,700/oz in Q4-2022, these factors are likely to limit the downside."

Looking ahead, Standard Chartered sees the Federal Reserve hiking by only 50 basis points at its upcoming September meeting and then pausing at November and December meetings. This is a slightly more dovish outlook than what markets expect, with the CME FedWatch Tool pricing in a 70.5% chance of a 75-basis-point hike in September.

"Our economists believe the Fed will pause as the U.S. economy is likely to lose momentum in Q4-2022, and that U.S. inflation will start to ease, albeit remaining elevated," Cooper said. "Fears around slower growth and rising risk of a recession should buffer the downside to gold. For now, gold is largely taking its cue from the USD, with the three-month rolling correlation at -58%."

In the short term, the gold price will get its direction from macro data, especially the employment report, which will be out on September 2.

In the meantime, investors' ETF exposure reveals less of a commitment to gold, as ETF holders have reduced their exposure over the past four months after the largest inflows in six quarters in the first quarter.

"While last year, net redemptions were driven by long-term holders of gold, recent outflows have been dominated by those holders establishing positions only within the past two years, suggesting that recent inflows have been less committed to gold compared to traditional ETF investors," Cooper noted.