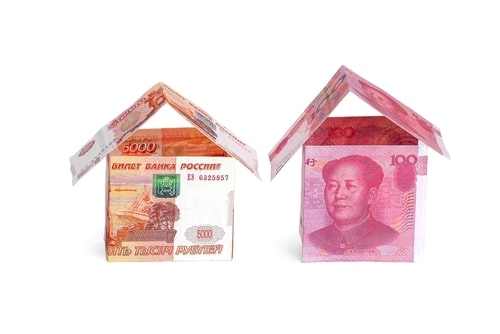 (Kitco News) Russia is planning to purchase around $70 billion worth of yuan and other "friendly" currencies this year, citing sanctions and the state of the ruble, Bloomberg reported. There is also a proposal to start selling those new yuan holdings later down the line to fund investment.

Moscow is considering a much bigger overhaul of its reserves after Western sanctions froze around half of its $640 billion foreign exchange reserves, Bloomberg reported citing people familiar with the matter.

"In the new situation, accumulating liquid foreign exchange reserves for future crises is extremely difficult and not expedient," the media report quoted a presentation prepared for a "strategic" planning meeting that included top government and central bank officials on August 30. "The frozen $300 billion were of no help to Russia; on the contrary, they became a vulnerability and a symbol of missed opportunities."

There was initial support for this plan following the meeting, Bloomberg added.

However, the Russian proposal did note a potential difficulty in selling yuan holdings in the future as that would require a "separate agreement with China, which will be very hard to get in a crisis," the presentation said.

Meanwhile, other "friendly" currencies have their own risks, with the UAE dirham facing "high political risks" and the Turkish lira suffering from devaluation problems, the document added.

The move goes along with Russia's efforts to accelerate its de-dollarization policies following sanctions placed on the country after it invaded Ukraine in February.

"The speed with which western nations and its allies sanctioned Russian FX reserves (freezing around half) no doubt shocked Russian authorities. The Central Bank of Russia effectively admitted as much and no doubt some BRICS nations – especially China – took notice of the speed and stealth at which the U.S. Treasury moved," said ING global head of markets Chris Turner.

Since then, no new data has been available since Russia's central bank paused its reserve currency breakdown reports after sanctions were introduced.