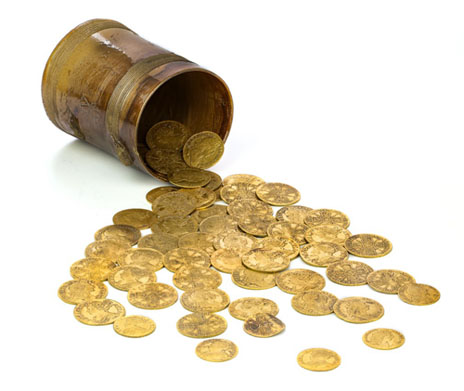 (Kitco News) - A kitchen renovation in a historic home in an English village led to the discovery of a trove of antique gold coins that could be worth up to $290,000.

According to the auction house Spink & Son, which will be auctioning off the coins next month, the 260 gold coins were found when residents unearthed an earthenware cup when they renovated their kitchen in July 2019. The cup, about the size of a soda can, was found buried beneath the original wooden floorboard.

The treasure trove of coins is named the Ellerby hoard, for the village where the house is located. Spink & Son said that this was the biggest hoard of 18th-century coins found in Britain.

"It is a wonderful and truly unexpected discovery from so unassuming a find location," said Gregory Edmund, an auctioneer with Spink & Son, in a press release. "Why they never recovered the coins when they were really easy to find just beneath original 18th-century floorboards is an even bigger mystery, but it is one hell of a piggy bank."

Edmund described the coins, some of them handmade, as "workhorses" that were heavily used as currency during the 1700s.

Historians have traced the coins to their original owners, Joseph and Sarah Fernley-Maisters, who were married in 1694. According to the press release, the Maisters were an influential mercantile family between the 16th century and 18th century. The family traded iron ore, timber and coal from the Baltic before the line died out after Sarah Maisters' death.

"Joseph and Sarah clearly distrusted the newly-formed Bank of England, the 'banknote' and even the gold coinage of their day because they (chose) to hold onto so many coins dating to the English Civil War and beforehand. Perhaps these wily owners preferred gold and were happy to accept century-old and even Brazilian coins before paper," said Edmund. "The number of coins and method of burial presents an extraordinary opportunity to appreciate the complicated English economy in the first decades of the Bank of England and significant distrust of its new-fangled invention, the 'banknote.'"

Each of the coins will go up for auction on Oct. 7; however, a rare Portuguese coin, a contemporary 1721 4000-Reis, struck during the reign of Jõaõ V of Portugal and known as a moidore, will be going to the British Museum.

"The contextualised discovery of [the moidore] coin is exceedingly rare for England, with only the Merton College Chapel trove of 1903 presenting a comparable profile," said Edmund.