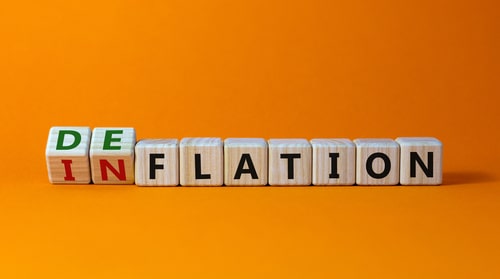 Wood pointed to lower commodity prices, gold prices, and declining freight fees as signs that price pressures are coming down.

She explained that gold, which is known for its inflation-hedge properties, is trading well below its peak of above $2,000 an ounce, while commodities like copper, lumber, iron ore and oil have dropped dramatically from earlier highs.

She also noted that the U.S. economy is already likely in a recession, which will eventually weigh on prices and bring down inflation.

The Fed's aggressive hiking cycle "will prove a mistake," Wood said in an investor webcast Tuesday. "We are getting some loud voices now accompanying us on this deflation risk."

August's price pressures out of the U.S. surprised the market on Tuesday, as Wall Street saw its worst day on record since June 2020 in response to the annual CPI number coming in at 8.3% versus the expected 8.1%.

Following the CPI data, markets began to price in a more aggressive rate hike from the Fed at its upcoming September meeting. According to the CME FedWatch Tool, there is now a 26% of 100 bps rate hike and a 74% chance of another 75 bps increase.

Wood's Ark Innovation ETF has been caught up in the market selloff this year, down 54.4% year-to-date. But despite the price performance, Wood's thinking is getting a nod from other big names, including Tesla and SpaceX CEO Elon Musk and DoubleLine CEO Jeffrey Gundlach.

In response to the question, "what should the Fed do?" Musk tweeted Wednesday that the U.S. central bank should "drop 0.25%." He added that "a major Fed rate hike risks deflation."

Gundlach also warned of a potential monetary policy error as the Fed runs away with rate hikes. Even though the DoubleLine CEO projects a 75 bps hike at the September meeting next week, he would prefer a much smaller increase of just 25 bps. Using many oversized rate hikes in a row without pausing could lead to unexpected consequences, Gundlach cautioned.

"In spite of the fact that the narrative today is exactly the opposite, the deflation risk is much higher today than it's been for the past two years," Gundlach told CNBC Tuesday. "I'm not talking about next month. I'm talking about sometime later next year, certainly in 2023."