TD Securities increases its tactical short position in gold, prices to fall to $1,580 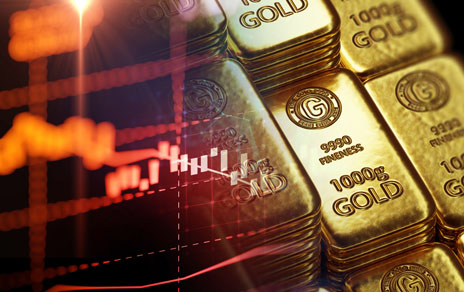 (Kitco News) - The gold market is starting a new trading week below a critical long-term support level and one Canadian bank sees the bearish momentum as an opportunity to add to its short position.

In a note Friday, commodity analysts at TD Securities said that they were increasing their current tactical short position as they see prices falling to $1,580 an ounce in the next two months as markets see further aggressive action from the Federal Reserve through the rest of the year and into 2023.

The analysts at TD Securities said that they are increasing their tactical short position as the gold market continues to creep closer to a major capitulation moment.

"While rates markets are now increasingly discounting the potential for higher interest rates to persist for some time, our analysis suggests gold prices aren't pricing in the next stage of the hiking cycle," the analysts said. "After all, gold and silver prices have tended to display a systematic underperformance in the final stages of the hiking cycle, when markets expect the real level of the Fed funds rate to rise above the neutral rate as estimated by Laubach-Williams."

Gold has fallen to a two-year low as inflation pressures in August were surprisingly resilient, despite a drop in energy prices. The elevated inflation threat has prompted markets to expect the U.S. central bank to raise the Fed Funds rate by 75 basis points on Wednesday. According to the CME FedWatch Tool, there is a 20% chance of the Federal Reserve moving a full 1%.

But more than just one rate hike, markets see the terminal rate pushing potentially has high as 5% by the first quarter of 2023. At the same time, the idea of the Federal Reserve pivoting in the second half of next year has been priced out of the market.

"Today, the increase in inflation's persistence suggests that a restrictive regime may last longer than historical precedents. In turn, we expect continued outflows from money managers and ETF holdings to weigh on prices," the analysts said.

Many analysts have noted that $1,675 represents an important support level for gold. According to some analysts, a sustained break below could signal an end to its three-year uptrend that started in late-May 2019. While gold prices could see some initial support around $1,650, some analysts have said that the technical picture shows the next major support level at $1,550 an ounce.