LONDON/NEW YORK, Sept 19 (Reuters) - The dollar gained against major currencies on Monday, trading within narrow ranges ahead of a slew of central bank meetings this week led by the Federal Reserve, which is likely to deliver another hefty interest rate hike.

Trade was generally subdued, with markets in London and Tokyo closed for public holidays.

World stock markets remained on edge and the dollar maintained its firm tone, given expectations that the Fed would maintain its aggressive tightening path to contain uncomfortably high inflation.

"On a high level, the greenback is benefiting from a continued sell-off in global equities," said John Doyle, vice president of trading and dealing at Monex USA in Washington.

"With the Fed's decision pending, I think the dollar will continue to take its cues from overall risk sentiment. We do not think the Fed will hike 100 basis points this week, but the potential is still real," he added.

Fed funds futures have priced in a 79% chance of a 75-basis-point rate hike this week and a 21% probability of a 100-basis-point increase at the conclusion of the U.S. central bank's two-day policy meeting, according to Refinitiv data. 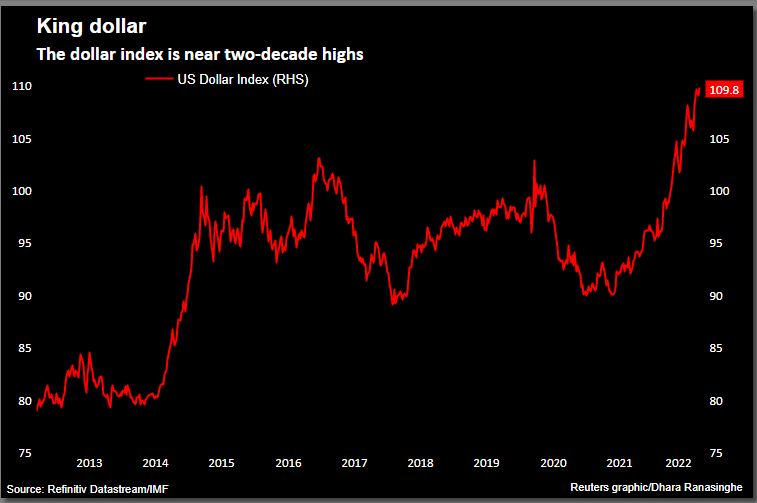 This week is also smattered with holidays that could thin liquidity and result in sharper price moves, with Japan and Britain off on Monday, Australia on Thursday, and Japan again on Friday, among others.

The Canadian dollar fell to its lowest level in almost two years at C$1.3324 per U.S. dollar .

"The drop in oil has allowed a modest rally against commodity-based currencies such as the Canadian dollar," said Monex's Doyle.

The dollar was around 0.4% firmer at 143.50 yen , hovering beneath a strong resistance level at 145 that has been reinforced by Japanese policymakers' toughened talk of currency intervention.

The Bank of Japan is widely expected to stick with massive stimulus at its meeting on Wednesday and Thursday, keeping its ultra-loose policy in place. But a turning point in Japanese monetary policy may come sooner than has been thought, with the central bank recently dropping the word "temporary" for its description of elevated inflation. read more

China's yuan ended at a fresh 26-month low on Monday and traded below the psychologically critical 7-per-dollar level . In offshore trade, the yuan was 0.35 weaker .

Bitcoin , the biggest cryptocurrency by market value, fell to a three-month low below $19,000, as unease over rising interest rates globally knocked risk assets. read more It was last down 0.9% at $19,241.

Ether, the cryptocurrency used in the Ethereum blockchain, rallied from a two-month low against the dollar and was last up 1.8% on the day at $1,358 .

Reporting by Dhara Ranasinghe in London and Gertrude Chavez-Dreyfuss in New York; Additional reporting by Kevin Buckland in Tokyo; Editing by Bradley Perrett, Frank Jack Daniel and Paul Simao
Disclaimer: The views expressed in this article are those of the author and may not reflect those of Kitco Metals Inc. The author has made every effort to ensure accuracy of information provided; however, neither Kitco Metals Inc. nor the author can guarantee such accuracy. This article is strictly for informational purposes only. It is not a solicitation to make any exchange in commodities, securities or other financial instruments. Kitco Metals Inc. and the author of this article do not accept culpability for losses and/ or damages arising from the use of this publication.
new