LONDON, Sept 20 (Reuters) - Stocks fell on Tuesday ahead of more interest rate increases from central banks to cool decades-high inflation, with Sweden leading a round of anticipated hefty hikes from its U.S., Swiss and British counterparts later in the week.

Shares in Europe turned lower by mid-session after U.S. stock futures eased, with the Federal Reserve kicking off a two-day meeting.

The dollar was near a two-decade high versus major peers, underpinned by expectations that the Fed will unveil another large rate increase when its meeting ends on Wednesday.

The STOXX index (.STOXX) of 600 European companies gave up initial gains to ease 0.5%, compounding a 16% slide for the year as fallout from war in Ukraine and rising inflation and borrowing costs fuel recession fears.

Sweden's central bank hiked rates by a greater than expected full percentage point on Tuesday and warned of more to come, a stark reminder for investors that tackling inflation remains a work in progress for many central banks.

Hikes from the Bank of England and Swiss central bank are expected on Thursday, piling more pressure on stock markets.

"Tighter monetary policy around the world will increase the headwinds for risk assets - after all, central bankers are deliberately trying to slow aggregate demand," ING bank said.

"The market, in a way, is probably expecting a peak in rates," Paolini said, adding that market focus would then switch to how higher rates were affecting economies and company earnings.

"We haven't seen it yet fully, I believe, as significant downgrade in earnings which I think will come. The downside for bonds is limited," Paolini said.

On a more positive note for stocks, the books for Volkswagen's (VOWG_p.DE) hotly anticipated initial public offering of Porsche AG on Sept. 29 are covered multiple times over. read more 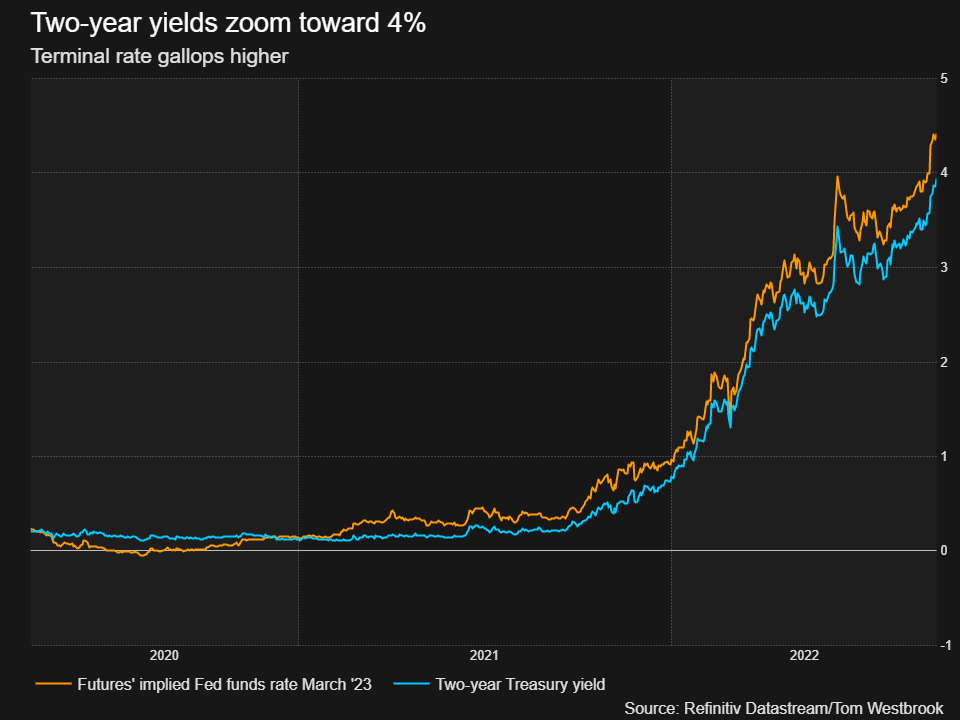 The other exception is the Bank of Japan, also due to meet this week and which has shown no sign of abandoning its ultra-easy yield curve policy despite a drastic slide in the yen and inflation hitting its fastest pace in eight years. read more

"Just because nobody expects anything coming from Japan, the central bank there could be the more interesting one this week because any hint they are going to change anything could have massive implications for the yen," Paolini said.

Share trading resumed in Japan on Tuesday after a national holiday. The Nikkei (.N225) advanced 0.4%, with technology stocks largely driving the climb.

Sentiment in Hong Kong was also boosted after the government flagged that change to its COVID-19 hotel quarantine policy for all arrivals was coming soon, saying it wanted an "orderly opening-up". read more

The two-year U.S. yield , a barometer of future inflation expectations, traded at 3.9664% after climbing to its highest since November 2007.

The dollar index , which measures the currency against six counterparts, was 0.31% stronger at 109.890.

Reporting by Huw Jones, additional reporting by Julie Zhu; Editing by Edwina Gibbs and Alison Williams
Disclaimer: The views expressed in this article are those of the author and may not reflect those of Kitco Metals Inc. The author has made every effort to ensure accuracy of information provided; however, neither Kitco Metals Inc. nor the author can guarantee such accuracy. This article is strictly for informational purposes only. It is not a solicitation to make any exchange in commodities, securities or other financial instruments. Kitco Metals Inc. and the author of this article do not accept culpability for losses and/ or damages arising from the use of this publication.
new