LONDON/NEW YORK, Sept 21 (Reuters) - The dollar surged to a new two-decade high on Wednesday just ahead of another expected aggressive Federal Reserve interest rate hike, as investors fled for safety after a decision by Russian President Vladimir Putin to mobilize more troops for the conflict in Ukraine.

Putin on Wednesday called up 300,000 reservists to fight in Ukraine and said Moscow would respond with the might of all its vast arsenal if the West pursued what he called its "nuclear blackmail" over the conflict there. read more

The news propelled the dollar index, which measures the greenback's value against six major currencies, to 110.87 <=USD>, its strongest level since 2002.

"When I look at my table, the five worst performing currencies are the Swedish crown, Polish zloty, Czech koruna, Hungarian forint and the euro. That's more a Putin worry because of hints that Russia might escalate the conflict in Ukraine and on what limits he puts on the weapons they use." 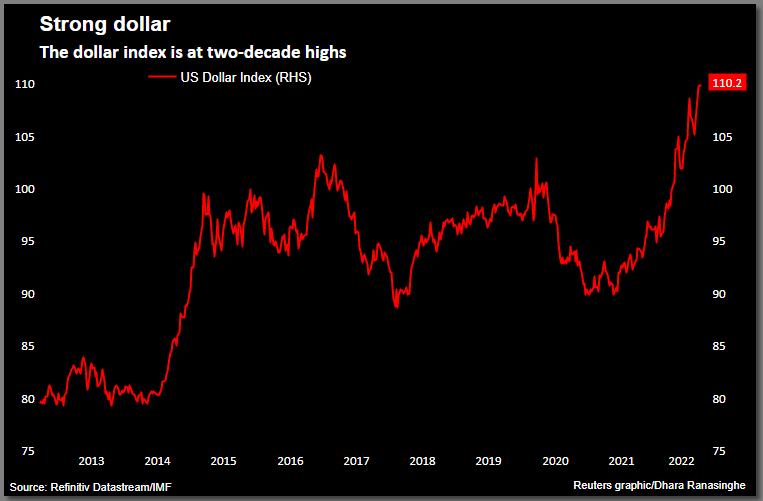 Dollar index at two-decade high ahead of Fed

European currencies bore the brunt of selling in foreign exchange markets as Putin's comments exacerbated concern about the economic outlook for a region already hit hard by Russia's squeeze on gas supplies to Europe.

Later on Wednesday, the Fed is expected to lift interest rates by three-quarters of a percentage point for a third straight time and signal how much further and how fast borrowing costs may need to rise to tame inflation. read more

The policy decision, due at 1800 GMT, will mark the latest move in a synchronized policy shift by global central banks that is testing the resilience of the world economy and the ability of countries to manage exchange rate shocks as the value of the dollar soars.

"What the market is looking for is whether (Fed Chair Jerome) Powell says the Fed does not know how far they have to go and they'll go as far as they need to go," said Standard Chartered's Englander.

"If someone asks him whether he sees rates going to 5% and he says he doesn't see it, but doesn't rule it out if that's needed to get inflation down, then that would be really hawkish and means they're opening up rates to an even higher range than what the market anticipates."

"It was interesting to me that dollar/yen dipped on the news of the announcement, potentially indicating a return of the yen's safe-haven credentials which have been absent for much of the year," said Colin Asher, a senior economist at Mizuho Corporate Bank.

Reporting by Dhara Ranasinghe in London and Gertrude Chavez-Dreyfuss in New York; Additional reporting by Lucy Raitano; Editing by Edwina Gibbs, Catherine Evans and Mark Heinrich
Disclaimer: The views expressed in this article are those of the author and may not reflect those of Kitco Metals Inc. The author has made every effort to ensure accuracy of information provided; however, neither Kitco Metals Inc. nor the author can guarantee such accuracy. This article is strictly for informational purposes only. It is not a solicitation to make any exchange in commodities, securities or other financial instruments. Kitco Metals Inc. and the author of this article do not accept culpability for losses and/ or damages arising from the use of this publication.
new