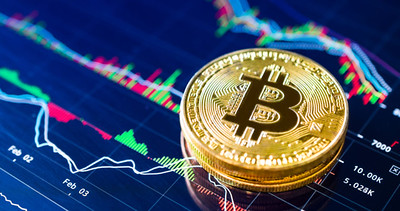 (Kitco News) - The wider crypto market traded mixed on Wednesday after the Federal Reserve announced a 75 bps hike in interest rates, aligning with consensus estimates and putting concerns about the ramifications of a full percentage point increase to rest.

Overall, it appears that the rate hike announcement was largely priced in, with traders maintaining their current positions after the afternoon failed to produce any unexpected developments.

Data from TradingView shows that while volatility spiked around the time that Fed Chair Powell was giving his speech, whipsawing the price of Bitcoin (BTC) from a high of $19,840 to a low of $18,700, after the dust settled BTC was trading slightly in the green above the $19,000 support level.

BTCs post-FOMC performance was a welcomed sight for many in the crypto ecosystem following Monday’s dismal performance which saw its price hit a three-month low.

Bulls still have work to do; however, as bears still remain in control of the price action according to Kitco senior technical analyst Jim Wyckoff.

“The bears have the overall near-term technical advantage amid a price downtrend in place on the daily chart. The path of least resistance for prices is presently sideways to lower,” Wyckoff said in his morning Bitcoin update.

Watch out for a bull trap

Not all traders in the market were quick to jump on the BTC price rally following the interest rate hike announcement including market analyst and pseudonymous Twitter user il Capo of Crypto, who posted the following tweet warning that the market could pump and then dump as a result of Powell's remarks.

Remember that every bounce is a short opportunity.

In a follow-up tweet, Capo posted the following chart outlining a more bearish path forwards for Bitcoin which could see it drop into the $14,000 - $16,000 range before finding its footing and once again climbing higher. 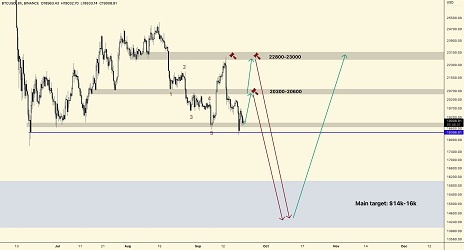 A mixed bag for the altcoin market

Volatility also spiked across the altcoin market, leading to a mixed bag of results with several tokens climbing higher while the vast majority of projects traded flat to negative.