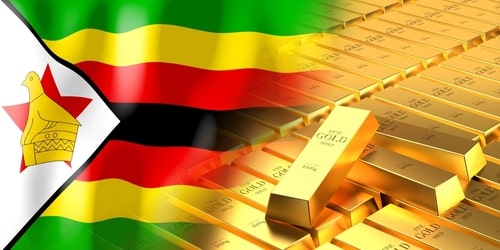 Over the summer, Zimbabwe's central bank started selling gold coins to fight inflation. The idea was that gold coins would provide a store of value to the country's plunging currency and give the population an alternative to the U.S. dollar.

The one troy-ounce 22-carat gold coins named 'Mosi-Oa-Tunya,' meaning "Smoke that Thunders" in reference to Victoria falls, have been very popular. After the first week of being launched, which was at the end of July, the country's central bank sold 1,500 gold coins.

Each gold coin has a serial number and can be bought with local currency, the U.S. dollar, and other foreign currencies. The price is set based on the international price of gold and production costs. As of this week, each gold coin was going for $1,755, according to the central bank's website.

The owners of the coins can convert them into cash or make a trade-in whenever needed. The gold coins could also be used as legal tender to transact in or as a security for loans.

The goal is to lower the demand for U.S. dollars following the collapse of the Zimbabwe dollar. Earlier, Zimbabwe revealed plans to adopt the U.S. dollar as legal tender for the next five years to stabilize the country's exchange rate. This is the second time in more than a decade that Zimbabwe is legalizing the greenback as legal tender.

Surging inflation and currency devaluation have made things difficult for Zimbabwe's population. The country's annual inflation accelerated by 285% in August. In response to the crisis, Zimbabwe's central bank has more than doubled its policy rate from 80% to 200%, a new record.

But the IMF sees this as a missed opportunity on the gold reserves side. "The sale of gold coins has contributed to withdrawing Zimbabwe dollar liquidity from the market, though it represents an opportunity cost in terms of foregone reserves for the Reserve Bank of Zimbabwe," Bloomberg quoted an IMF spokesperson as saying Thursday.

Earlier in the week, the IMF noted that Zimbabwe’s monetary policy moves were helping with currency devaluation. “The recent tightening of monetary policy and the contained budget deficits are policies in the right direction and have contributed to the narrowing of the parallel market exchange rate gap,” the IMF said Monday.

Due to the popularity of one-ounce gold coins, the country's central bank is also working on releasing a tenth of an ounce coins.

The gold coin idea also inspired the country to try incentivizing the nation's biggest gold miners to produce above the state-planned targets.

Large miners are being encouraged by the government to produce more gold. And those who exceed their targets can receive 80% of the payment for the additional output in foreign currency. The current payment plan is a 60-40 split between foreign and local currency payments.

Zimbabwe's gold output is already up 47% this year, with the government looking for gold mining to account for a third of 2023's overall mining industry targeted $12 billion in revenue.