Sept 23 (Reuters) - The blue-chip Dow Jones Industrial Average (.DJI) tumbled on Friday, on pace to confirm that it has been in a bear market after it fell 20% from its January record high.

The Dow would be the last of the three main indexes to gain the bear market status after the S&P 500 (.SPX) notched that grim milestone in June and the Nasdaq (.IXIC) in March.

If the Dow closes below 29,439.72 points, it would confirm a bear market that began from Jan. 4, according to a widely used definition.

The renewed selling pressure in markets comes in a week that saw the U.S. Federal Reserve raise interest rates by three-quarters of a percentage point for a third straight time and a vow to keep it going until inflation is under control.

It has been a tumultuous year for Wall Street, plagued by worries about Russia's invasion of Ukraine, an energy crisis in Europe and the end of easy money policy globally.

The last time the three indexes pulled back so sharply was in 2020 during the heights of the pandemic selloff.

Heightened fears of a U.S. economic downturn next year and its impact on corporate profits has prompted brokerages to downgrade their year-end targets for the S&P 500. read more 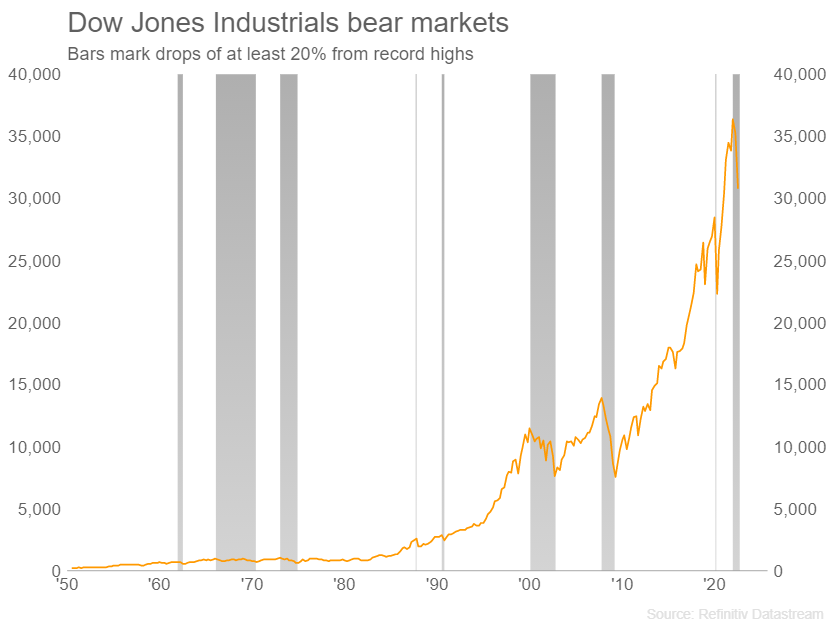 Dow Jones Industrials bear markets
Reporting by Medha Singh in Bengaluru; Editing by Shounak Dasgupta, Shinjini Ganguli and Maju Samuel
Disclaimer: The views expressed in this article are those of the author and may not reflect those of Kitco Metals Inc. The author has made every effort to ensure accuracy of information provided; however, neither Kitco Metals Inc. nor the author can guarantee such accuracy. This article is strictly for informational purposes only. It is not a solicitation to make any exchange in commodities, securities or other financial instruments. Kitco Metals Inc. and the author of this article do not accept culpability for losses and/ or damages arising from the use of this publication.
new