Bitcoin and gold have upper hand versus commodities in next 10 years, says Bloomberg Intelligence 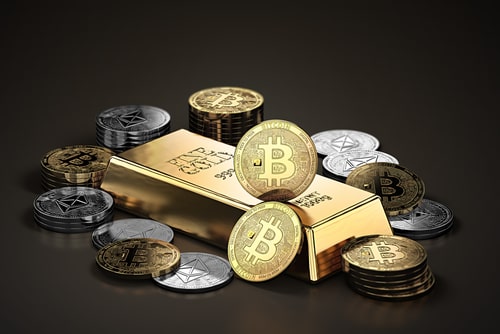 (Kitco News) The outlook for the rest of the decade favors Bitcoin and gold rather than commodities, said Bloomberg Intelligence, noting that the end of the Federal Reserve's aggressive tightening is in sight.

"The most central banks in history hike[d] rates with the world tilting toward recession. Lower commodity and risk-asset prices may be the only way out with deflationary implications, which should buoy the price of gold and its digital version, Bitcoin," said Bloomberg Intelligence senior commodity strategist Mike McGlone.

Last week, the Federal Reserve raised rates by 75 basis points for the third time in a row. The big news from the updated statement was that the federal funds rate could go up to 4.4% by the end of this year and then rise to 4.6% in 2023. For markets, this likely means another 75-basis-point hike in November and an additional 50-basis-point increase in December.

And with the end of the tightening cycle more or less known, crypto could resume its bullish trend after this year's major retracement.

"It's been a bad decade for commodities and an exceptionally good one for Bitcoin, and 2022 may prove the higher-price cure stronger than ever, favoring the crypto. With Federal Reserve tightening nearing an endgame, risk vs. reward may be tilting toward resuming the enduring upward trajectory in Bitcoin, notably vs. most commodities," McGlone wrote.

Commodities and crypto began the year in polar opposite directions. As most commodities rallied to new record highs, the crypto sector suffered significant losses. Bitcoin, for example, dropped more than 70% from its last year's record high of $69,000.

However, looking forward, commodities are likely to continue to give up their gains while Bitcoin, currently one of the most discounted assets, starts to gain, McGlone described.

"The lowest-ever crypto volatility vs. the Bloomberg Commodity Index (BCOM) may portend a resumption of Bitcoin's propensity to outperform," he said. "What's unique relative to commodities is 260-day volatility of the crypto dropping to new lows. If history is a guide, Bitcoin volatility is more likely to recover vs. commodities when the crypto heads toward new highs."

Meanwhile, commodities are likely to be weighed down by the supply-demand fundamentals and the aftereffects of aggressive central bank tightening, McGlone added.

When looking at Bitcoin versus gold, Bloomberg Intelligence sees the former likely outperforming the latter in the long-term as it could be transitioning to become a "high-beta version of gold and U.S. Treasury bonds," the senior commodity strategist said. Also, Bitcoin's rising adoption versus its declining supply is working in its favor.

"The nascent technology/asset is a top contender to outperform [gold] in the long term, and is retreating into a good support zone," McGlone said. "The Bitcoin-to-gold ratio at about 10x, which was first reached in 2017. In a world rapidly going digital, the benchmark crypto is a top competitor to old-guard gold."