Production at the Chilean mining giant Codelco, the world’s largest copper mining company, declined 9% year-on-year to 397 thousand tonnes (incl. Codelco’s stake in El Abra and Anglo American Sur) in Q2 2022. The company said that its copper production was affected by a lower ore grade at the Ministro Hales mine, along with lower processing rates and copper recovery at the Chuquicamata and El Teniente divisions.

Freeport-McMoRan is second as the company’s attributable copper production amounted to 392 thousand tonnes in Q2 2022, which is 17% more than a year ago, primarily due to increased operating rates at the Grasberg minerals district and Cerro Verde.

BHP Billiton is third with 313 thousand tonnes of copper (attributable) mined in Q2 2022, up 14% compared to Q2 2021. The company said that in Q2 2022, it registered higher volumes at Escondida due to increased grade and concentrator throughput, at Spence due to improved leaching performance and at Olympic Dam following major smelter maintenance campaign impacts in the prior period.

Glencore sits fourth. The company’s Q2 2022 own sourced copper production of 252 thousand tonnes was 15% lower than in Q2 2021 due to ongoing geotechnical constraints at Katanga, the basis change arising from the sale of Ernest Henry in January 2022, Collahuasi mine sequencing and lower copper units produced within Glencore’s zinc business.

China’s Zijin Mining, which controls the largest volumes of copper and gold resources overseas among Chinese companies, ranked fifth, with its mine-produced copper of 216 thousand tonnes reported for Q2 2022. The company increased its quarterly copper output following the successful production commencement of key projects such as the Upper Zone of the Cukaru Peki copper and gold mine in Serbia, the Kamoa-Kakula copper mine and the Julong copper mine in Tibet.

Southern Copper is sixth. The company’s mined copper production in the second quarter of 2022 fell by 12.1% to 208 ktonnes y-o-y. This decline was mainly attributed to a production drop due to the Cuajone mine stoppage, and lower copper production at Toquepala and La Caridad due to lower grades. 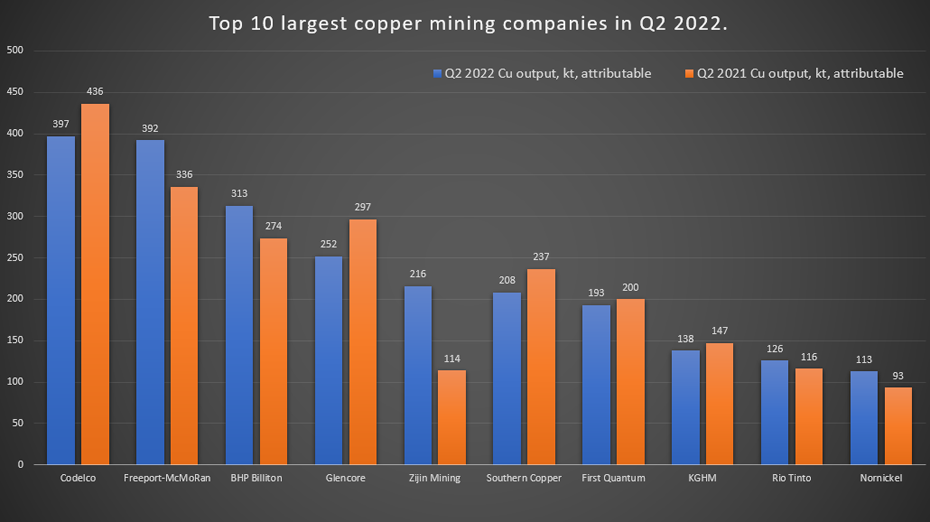