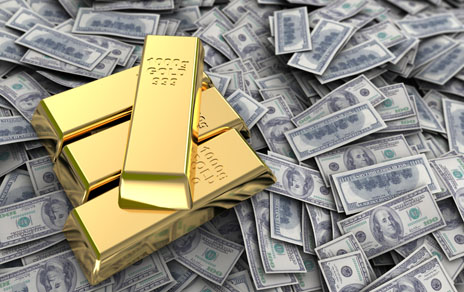 (Kitco News) - Bearish sentiment in the gold market has reached a four-year high. However, while gold prices appear oversold and conditions are ripe for a short squeeze, many analysts are warning investors not to try and catch a falling knife.

Surging momentum in the U.S. dollar and rising bond yields have forced hedge funds to increase their bearish bets in gold to their highest level since November 2018, according to the latest trade data from the Commodity Futures Trading Commission.

The CFTC disaggregated Commitments of Traders report for the week ending Sept. 20 showed money managers dropped their speculative gross long positions in Comex gold futures by 1,756 contracts to 78,544. At the same time, short positions rose by 16,602 contracts to 115,239.

Gold's net short positioning increased to 36,695, doubling from the previous week. During the survey period, gold prices dropped through long-term support at $1,675 and fell to a two-year low at $1,646.60 an ounce.

Analysts note that hedge funds increased their short positioning ahead of the Federal Reserve's September monetary policy meeting. As expected, the U.S. central bank raised interest rates by 75 basis points. However, the committee was more hawkish than expected as it lowered its growth forecast and signaled that rates could rise as high as 4.6%, peaking in 2023.

Initially, gold was able to withstand the hawkish Fed, but major volatility in the global currency market has secured the U.S. dollar's dominance over the precious metal. Many analysts have said that solid momentum in the U.S. dollar will continue to weigh on gold.

"As much as I think USD is getting overbought and due for a correction, gold not only broke down below $1,680, it also dropped under its 200-day moving average, and those are just too technically significant and bearish to ignore," Colin Cieszynski, chief market strategist at SIA Wealth Management said in a recent statement to Kitco News.

Along with the U.S. dollar, SocGen analysts noted that rising real yields will also weigh on gold.

Analysts also note that the sentiment in futures markets is also reflected in another paper market: gold-backed exchange-traded products. SocGen said that 15.7 tonnes of gold flowed out of ETFs during the survey period last week, "the largest outflow seen for any given 7-day period since July 2022."

Commodity analysts at Commerzbank noted that gold ETFs had seen outflows for the last 15 straight weeks.

Commodity analysts at TD Securities said that they expect to see further selling pressure in gold.

"Rising nominal yields and moderating inflation expectations due to tightening monetary policy will lift real rates on the short end of the curve, which will likely see more selling pressure and length reductions," the analysts said in a note.

While prolonged bearish sentiment has never been sustainable in the gold market and the risk of a short squeeze builds, analysts say that investors should wait for some stabilization in the marketplace.

Although investors are outright bearish on gold, there is slightly more hesitation within silver as hedge funds have lowered their overall exposure to the precious metal.

The disaggregated report showed that money-managed speculative gross long positions in Comex silver futures fell by 1,758 contracts to 36,594. At the same time, short positions fell by 2,022 contracts to 44,615.

Positioning in the silver market remains short by 8,021 contracts, relatively unchanged from the previous week.

During the survey period, silver prices were unable to break above resistance at $20 an ounce and solid selling pressure pushed prices below support at $19.00.

Similar to gold, silver has struggled as it faces strong headwinds from the U.S. dollar.

Not only is silver suffering as a monetary metal, but growing recession fears continue to weigh on industrial demand.

Copper is also struggling to find direction as hedge funds are reluctant to take any significant position in the base metal.

Positioning in the copper market remains bearish by 4,262 contracts, roughly unchanged from the previous week.

Commodity analysts at TD Securities said they are looking for further weakness in copper.