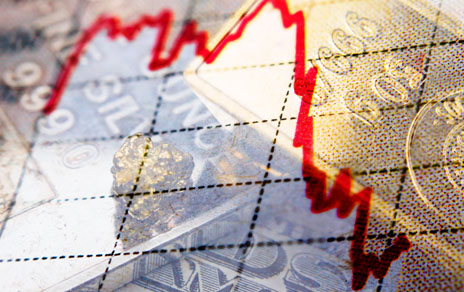 (Kitco News) - The gold market has struggled to attract any consistent bullish momentum, falling under the weight of rising interest rates, which is forcing one Canadian bank to downgrade its forecast for gold and silver.

In its latest commodities update, analysts at BMO Capital Markets said that they are lowering their 2023 gold price forecast by 6% to average the year around $1,649 an ounce. Prices are expected to continue to struggle through 2024, with an average price forecast of $1,615 an ounce, down 4% from the previous estimate.

The bank's long-term gold price remains unchanged at around $1,400 an ounce.

BMO is even more bearish on silver as the analysts see prices averaging around $19.9 an ounce next year, down 11% from the previous forecast. Silver prices are expected to average 2024 around $21.4 an ounce, down 3% from the prior estimate. Long-term, the bank sees silver prices holding at around $20.00.

The analysts said that growing recession fears will continue to weigh on silver through the next two years.

However, long term, the bank remains optimistic that industrial demand and growing demand for solar energy will provide long-term support for silver.

"We maintain that industrial silver demand is set to benefit from the rollout of 5G infrastructure, rising EV penetration rates, continued strength in the consumer electronics sector, wearable devices in the medical sector and accelerating solar power generation capacity additions. Since our last quarterly, we have lifted our renewable generation capacity addition and now expect industrial silver demand, including photography, to grow by 154Moz (up from 117Moz in the previous update) by 2030, compared to 2021 levels," the analysts said.

Although the bank has downgraded its gold forecast, the analysts said they don't see a complete rout in the price action, with growing economic uncertainty providing some support.

"In the near term, increasingly restrictive monetary policy will likely weigh on gold, but the seemingly mounting probability of economic pain should help to underpin prices. To gain conviction of material price upside, we need to see macro asset allocators pivoting back into gold, which could be driven by concerns over inflation becoming entrenched, escalating geopolitical tensions, the dollar rolling over from multi-decade highs, or recession," the analysts said.

It's not just the precious metals market that is expected to see further weakness throughout the entire commodity complex.

"Unsurprisingly, given the wider economic malaise, downward revisions are once again a theme in this quarterly update," the analysts said. "Given wider market volatility and industrial pressures, commodity exposure should be highly selective and nimble at the present time."

Commodity analysts are most bearish on tin, revising their price forecast down by 29%, with prices expected to average $10.21 per pound next year.

The bank is bullish on uranium, increasing its price outlook to $52 a pound next year, up 9% from the previous forecast.

"One of the key commodity beneficiaries of the energy crisis this year is uranium. With the push for relative energy independence, low-carbon technology and alternatives to Russian fossil fuels, nuclear power looks set for somewhat of a renaissance," the analysts said. "Uranium prices have underperformed peers, for good fundamental reasons, over the past decade and indeed the past eighteen months. However, this leaves uranium as the only major commodity we cover trading below its long run equilibrium price, and thus relative to peers has more upside on a five-year view."