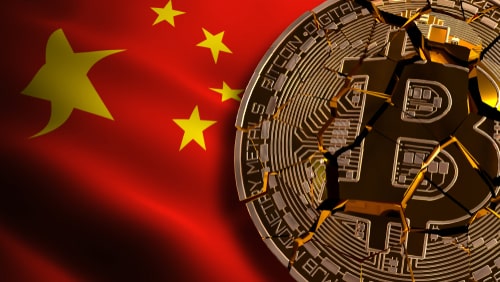 (Kitco News) The People's Bank of China (PBOC) is focused on its crackdown efforts to eliminate Bitcoin transactions for financial stability. And now it says it is succeeding.

China's central bank views virtual currency transactions as a threat to the nation's financial security and capital controls. This comes at a time when China is dealing with a slowing economy and a property crisis.

"While we continue to crack down on domestic transactions and virtual asset hype, the share of Bitcoin trading in China has plummeted," the bank's Financial Stability Bureau wrote on its official WeChat account this week.

China's portion of global Bitcoin transactions fell to 10% in March. This is a massive drop from its peak of 90% back in 2017, the Bureau said.

The country's central bank also said it is taking its fight even further by stating that cryptocurrencies and peer-to-peer (P2P) transactions are all threats to the banking industry.

This is all part of an ongoing crypto crackdown by the government. Last year, China banned all cryptocurrency trading and mining activities. And in April, it banned using NFTs (non-fungible tokens) as financial assets. China also banned initial coin offerings (IPOs) five years ago.

Yet despite these efforts, China is still in the top ten countries within the Global Cryptocurrency Acceptance Index, according to a report by Chainalysis. The report suggested that China's crypto ban has either been "ineffective" or "loosely enforced."

"China re-entered the top ten of our index this year after placing 13th in 2021," Chainalysis said in the report released earlier this month. "Our sub-indexes show that China is especially strong in usage of centralized services, placing second overall for purchasing power-adjusted transaction volume at both the overall and retail levels. This is especially interesting given the Chinese government's crackdown on cryptocurrency activity."