'The worst is yet to come': Euro area and UK are in recession, U.S. is 'flirting' with one - Credit Suisse 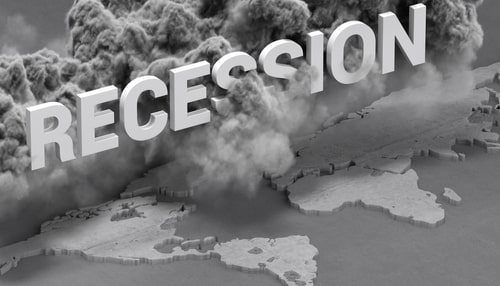 (Kitco News) After an already chaotic September, "the worst is yet to come," according to Credit Suisse, which sees central banks counting on raising rates as economies face recession.

Economies around the world are at risk as central banks are forced to mercilessly tighten economic policy to slow down inflation, Credit Suisse said in its latest economic outlook.

"Higher rates combine with ongoing shocks to lead us to cut GDP forecasts," the report said. "The euro area and the UK are in recession, China is in a growth recession, and the U.S. is flirting with recession."

Credit Suisse sees global GDP at 2.6% this year and 1.6% next year. For markets, this means that stocks and risky assets will see their conditions deteriorate even further as the year wraps up.

On top of that, there are growing downside risks to these forecasts, the report added. "Crucially, the rising share of price categories above central bank inflation target levels shows inflation is broadening out from a limited group of supply shock related drivers to more general inflation," Credit Suisse said. "This broadening requires tighter policy and weaker economies because it increasingly reflects tight labor markets."

Rate hikes by the Federal Reserve are yet to be felt by the U.S. economy, as Thursday's jobless claims numbers still point to a strong labor market.

The initial weekly jobless claims dropped by 16,000 to 193,000 in the week to Saturday, surprising the market with another unexpected contraction that marked the lowest level in five months.

In light of this, Credit Suisse is projecting for the Fed to remain aggressive, with the federal funds rate likely peaking only at 4.5%-4.75%. The current range is 3%-3.25%.

Calls for steep recessions have been growing as the third quarter comes to a close. This week, Stanley Druckenmiller, billionaire investor and founder of Duquesne Capital, has forecasted a "hard landing" for the U.S. economy in 2023 as the hawkish Fed proceeds with its tightening cycle.

"Our central case is a hard landing by the end of '23," Druckenmiller said at CNBC's Delivering Alpha Investor Summit in New York City. "I will be stunned if we don't have a recession in '23. I don't know the timing, but certainly by the end of '23. I will not be surprised if it's not larger than the so-called average garden variety."

At the same conference, Citadel's billionaire founder Ken Griffin commented that his hedge fund is "very focused on the possibility of a recession." But Griffin was slightly more optimistic, stating that "the U.S. economy is still strong for people who are going to work every day," Griffin said.