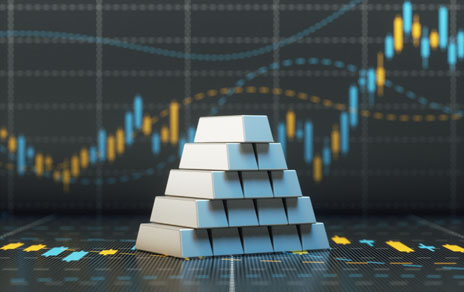 (Kitco News) - Improving sentiment in the marketplace is driving the silver market to a six-week high, with prices seeing a solid break above the critical psychological level at $20 an ounce.

Not only is silver supported by solid fundamentals, but analysts note that the precious metal is seeing strong technical momentum after spending most of the summer in oversold territory. Gold is seeing some short-squeeze momentum as prices have broken through major buy stops at $20, $20.25.

December silver prices last traded at $20.48 an ounce, up 7.57% on the day. The precious metal is seeing its best percentage gains since mid-August 2020. silver is significantly outperforming gold, which is testing resistance at $1,700 an ounce and up 1.38% on the day.

Silver's rally comes a few days after Oxford Economics touted the precious metal's role as an essential asset in an investment portfolio.

The economic research firm conducted the study on behalf of the Silver Institute; according to the analysts, silver should be regarded as a distinct asset class and investors would benefit from an allocation between 4% and 6%.

"This is considerably higher than most institutional investment portfolios, where exposures to silver generally amount to no more than 0.2% and are mainly achieved indirectly through commodity indices," the analysts said in the report.

The analysts noted that most investors view gold and silver as similar monetary metals, safe-haven assets; however, Oxford Economics said there are some important differences between the two precious metals. The biggest difference between silver and gold is industrial demand. The report noted that roughly half of silver demand comes from industrial applications.

"Silver encompasses the investment attributes of a precious metal while simultaneously boasting a wide array of active industrial applications. While silver's price movements are closely correlated with gold, our analysis indicates that its return characteristics are sufficiently different to make it a valuable diversification tool that warrants its own portfolio commitment," the analysts said.

Similar to gold, the analysts also noted that silver has a relatively low correlation with developed markets, making it a valuable diversification tool.

"The price of silver has risen during four of the eight stock market corrections experienced over the past 20 years, while its price fell by less than equities during the other four episodes. Although silver underperforms gold as a safe-haven asset, it can still help to reduce losses in times of market stress," the analysts said.

The gold/silver ratio has been in a steady uptrend for the past decade as silver has struggled to outperform gold in uncertain economic conditions; however, Oxford Economics said that they expect the trend to reverse in the next few years as normalcy returns to financial markets.

"We believe the price of gold will also come under pressure in the near term as safe-haven flows fall back and uncertainty subsides. Although movements in the price of silver are likely to remain correlated with gold, the silver price should be somewhat insulated from this market correction given that it has not been inflated to the same extent as gold," the analysts said. "Silver will also benefit from strengthening industrial demand."

Oxford Economic's baseline expects the global economy to avoid a severe downturn, with global GDP averaging about 2.7% for the next five years. Economists see inflation peaking in 2022 and the disinflation trend of the last decade resuming.