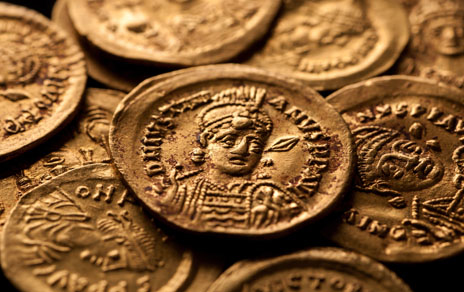 (Kitco News) - A hoard of ancient gold coins discovered in Golan Heights could provide some valuable insights into the region's tumultuous history, according to Israeli archaeologists.

Monday, the Israel Antiques Authority announced that 44 gold coins weighing about 170 grams and dating back more than 1,000 years were found at the base of a stone wall as archaeologists explore the Banias archaeological site within the Hermon River nature reserve.

The archaeologists assume that the treasure was hidden by its owner during the Muslim Conquest around 635 CE.

"The discovery reflects a specific moment in time when we can imagine the owner concealing his fortune in the threat of war, hoping to return one day to retrieve his property," excavation director Yoav Lerer said in a statement.

"The discovery of the coin hoard may also shed light on the economy of the city of Banias during the last 40 years of Byzantine rule," Lerer added.

"In his early years as emperor, only his portrait was depicted on the coin, whereas after a short time, the images of his sons also appear," Bijovsky said. "One can actually follow his sons growing up – from childhood until their image appears the same size as their father, who is depicted with a long beard."

The Banias region is recognized as an important spiritual site for several cultures throughout ancient history.