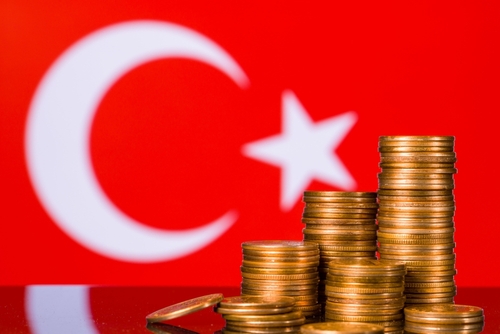 (Kitco News) Turkey saw gold imports shoot up 543% to $3.1 billion in September, the latest data from the Trade Ministry revealed. In the meantime, annual inflation has accelerated to a fresh 24-year high of 83.45% in September.

This was largely due to energy imports, which rose 115% to $9.56 billion last month, marking the highest monthly level on record.

The country's Trade Minister Mehmet Mus stated that energy imports were about a third of total imports in the first nine months of the year. One of the top exporters to Turkey is Russia because of the energy element.

At the same time, gold-supplying banks slashed shipments to India and focused more on China and Turkey due to better premiums, Reuters reported citing bank officials.

"Buyers in China and Turkey are right now paying a very high premium. There is no comparison when we equate it with the Indian market," one of the officials said.

The annual inflation number in Turkey reached 83.45% in September, the highest level since July 1998, as transport prices rose nearly 118% and food and non-alcoholic drinks climbed 93.05%.

Despite surging price pressures, Turkey's central bank has been cutting interest rates, which were lowered from 14% at the beginning of the year to 12%.

And President Tayyip Erdogan has called for an even more accommodative rate.

Goldman Sachs is projecting that the country's central bank will keep cutting rates by 100 basis points every month until the end of 2022.